Here are a few of the first varieties from 4 plant trials of 2021 seedlings. Four plant trials are usually my first step after doing gross selection on seedlings for traits of obvious interest. The goal here is mostly to look at tuber size and yield when the plants are grown from tubers. None of these first three are keepers. Two had low yields and one had very good yield, but no dormancy. These are all seedlings out of Jancko Phinu with unknown pollen donors. 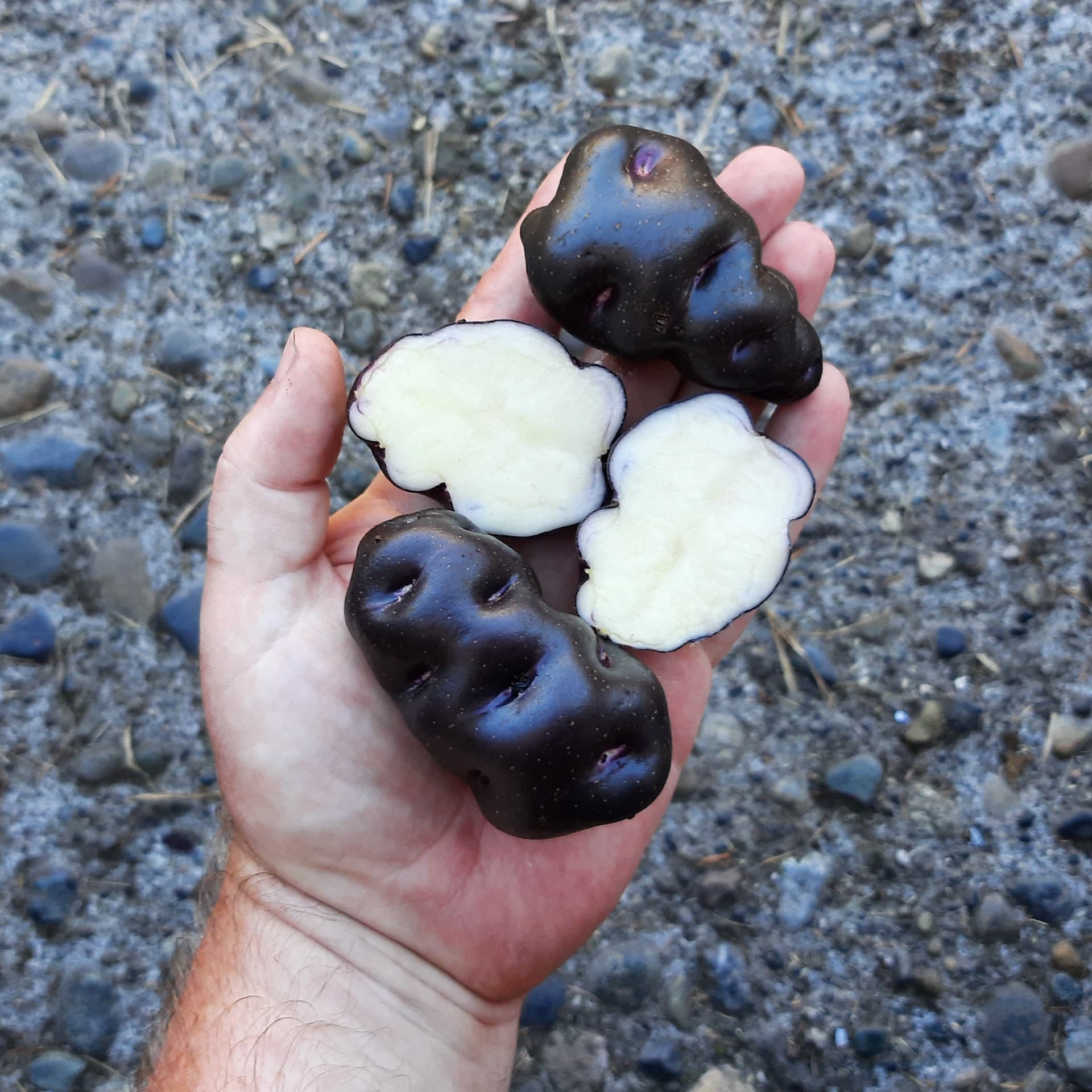 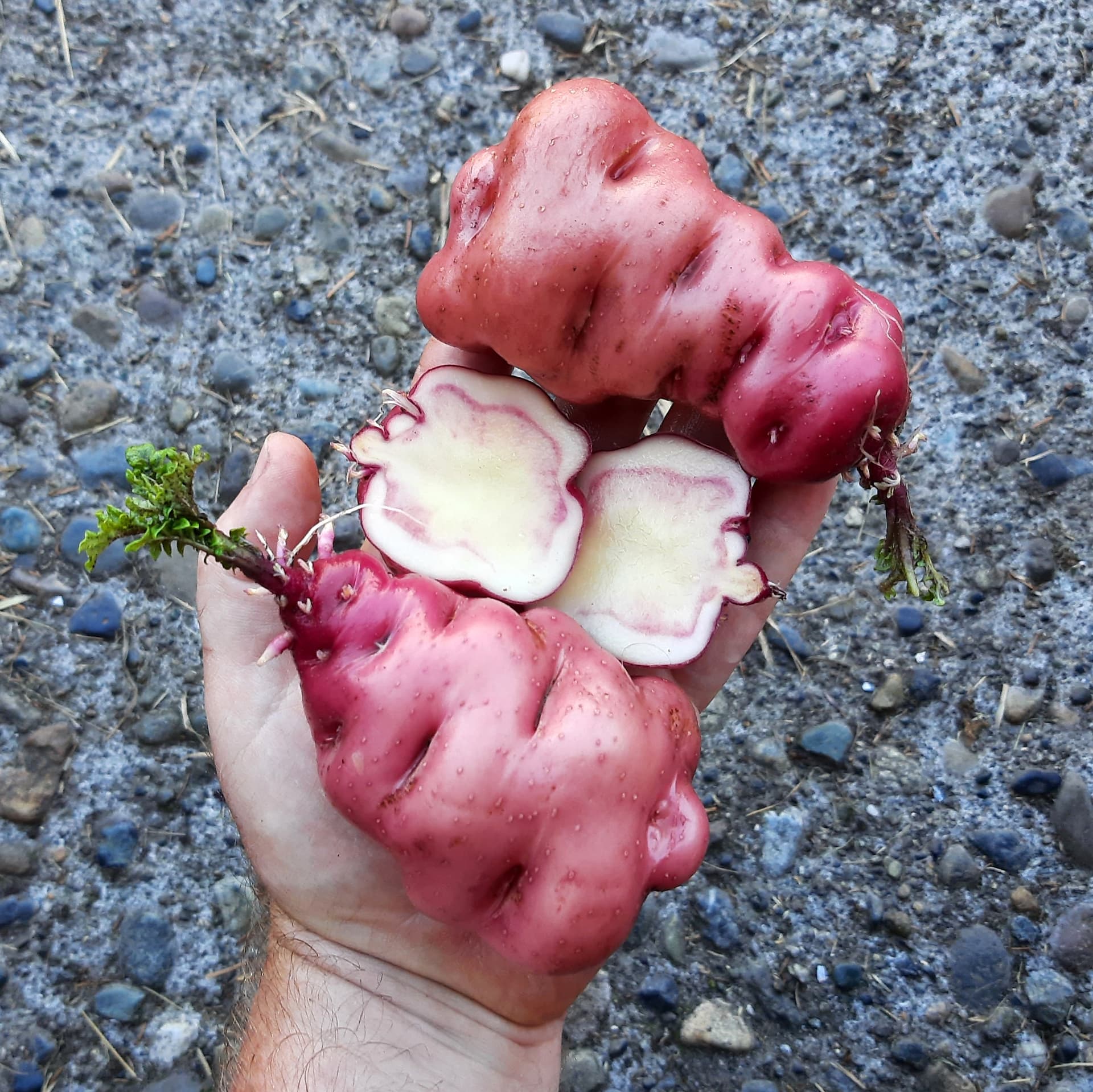 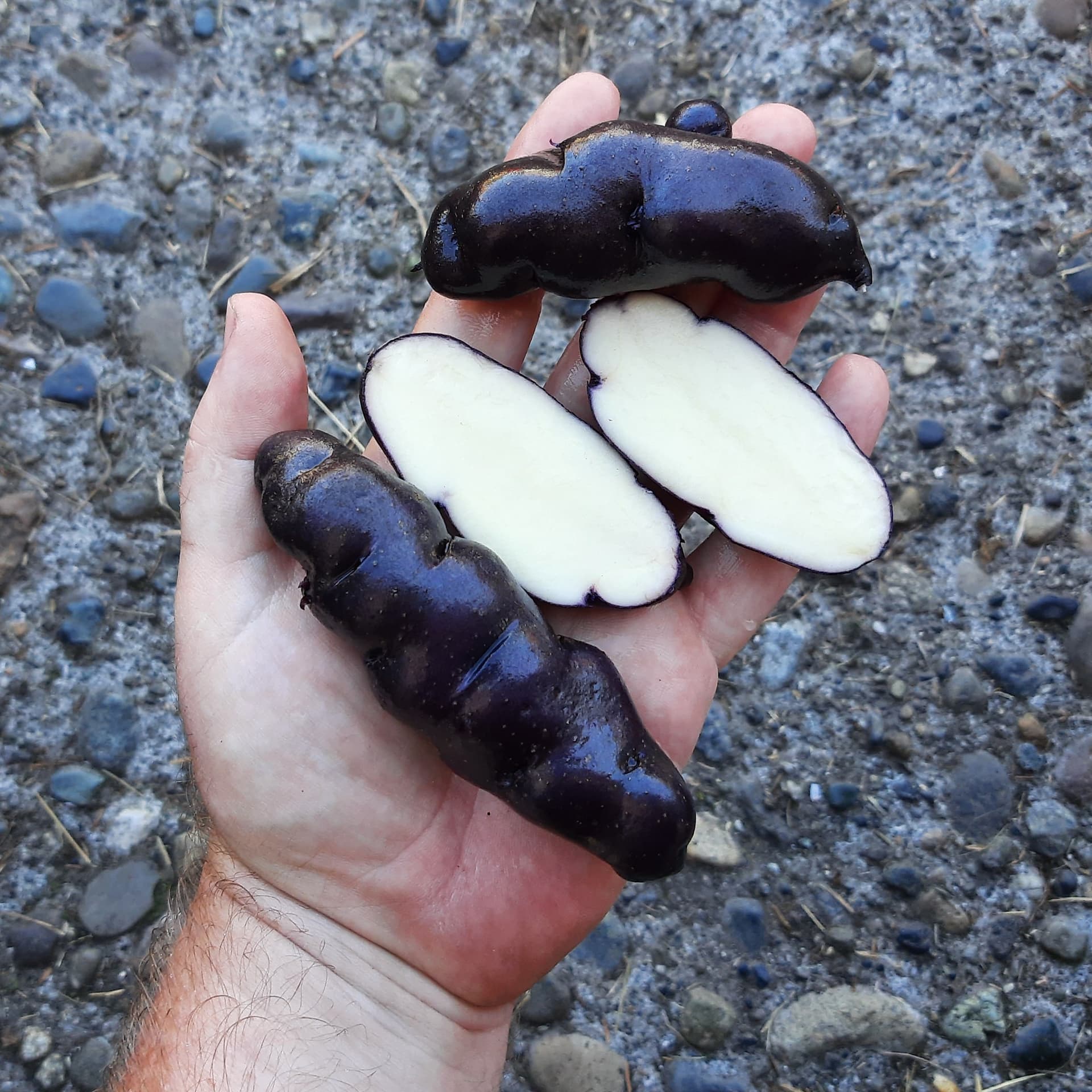 A few more from the same batch. More disappointment, although I will consider keeping the round one for another year. It is has excellent flavor and good yield, but I was disappointed to see the poor dormancy. 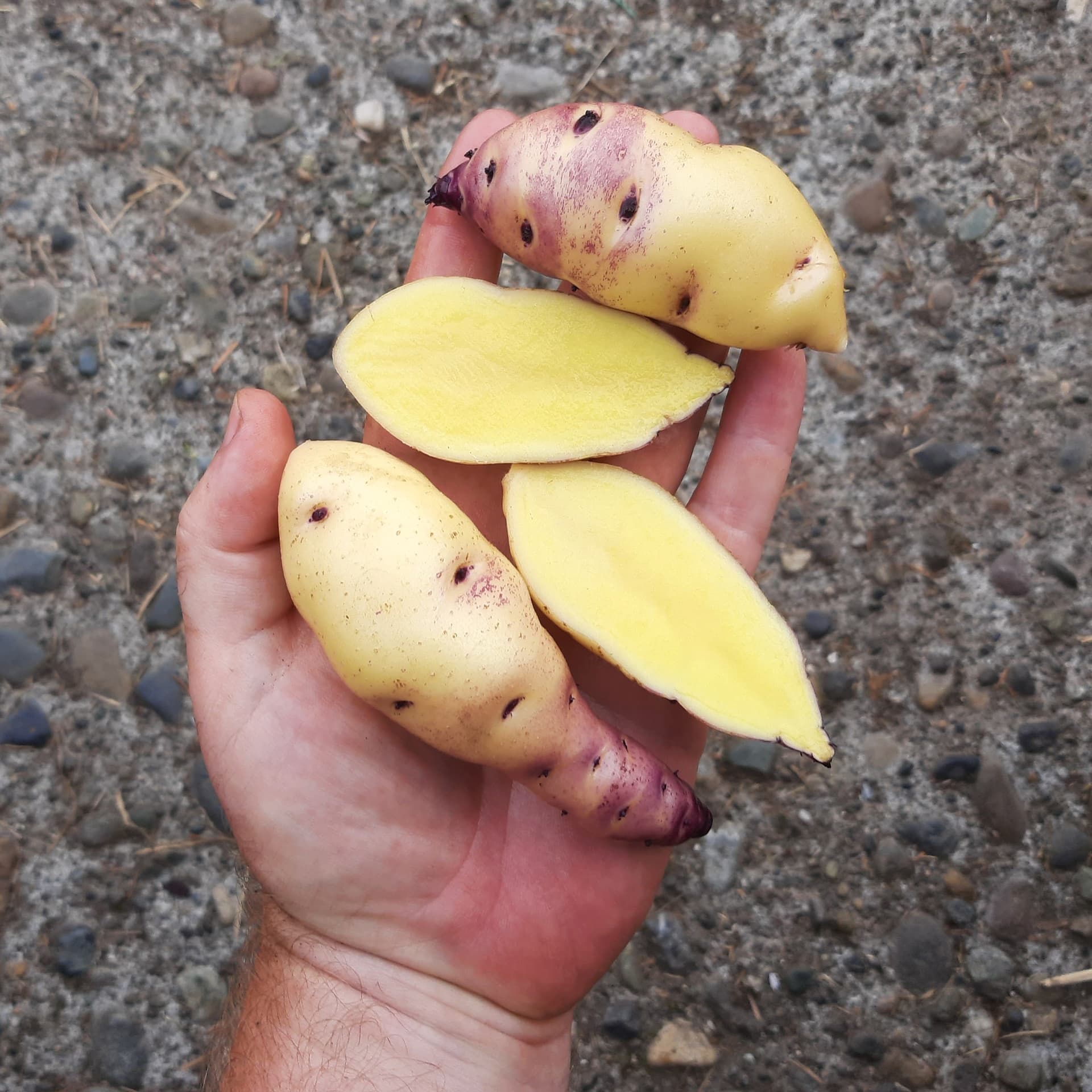 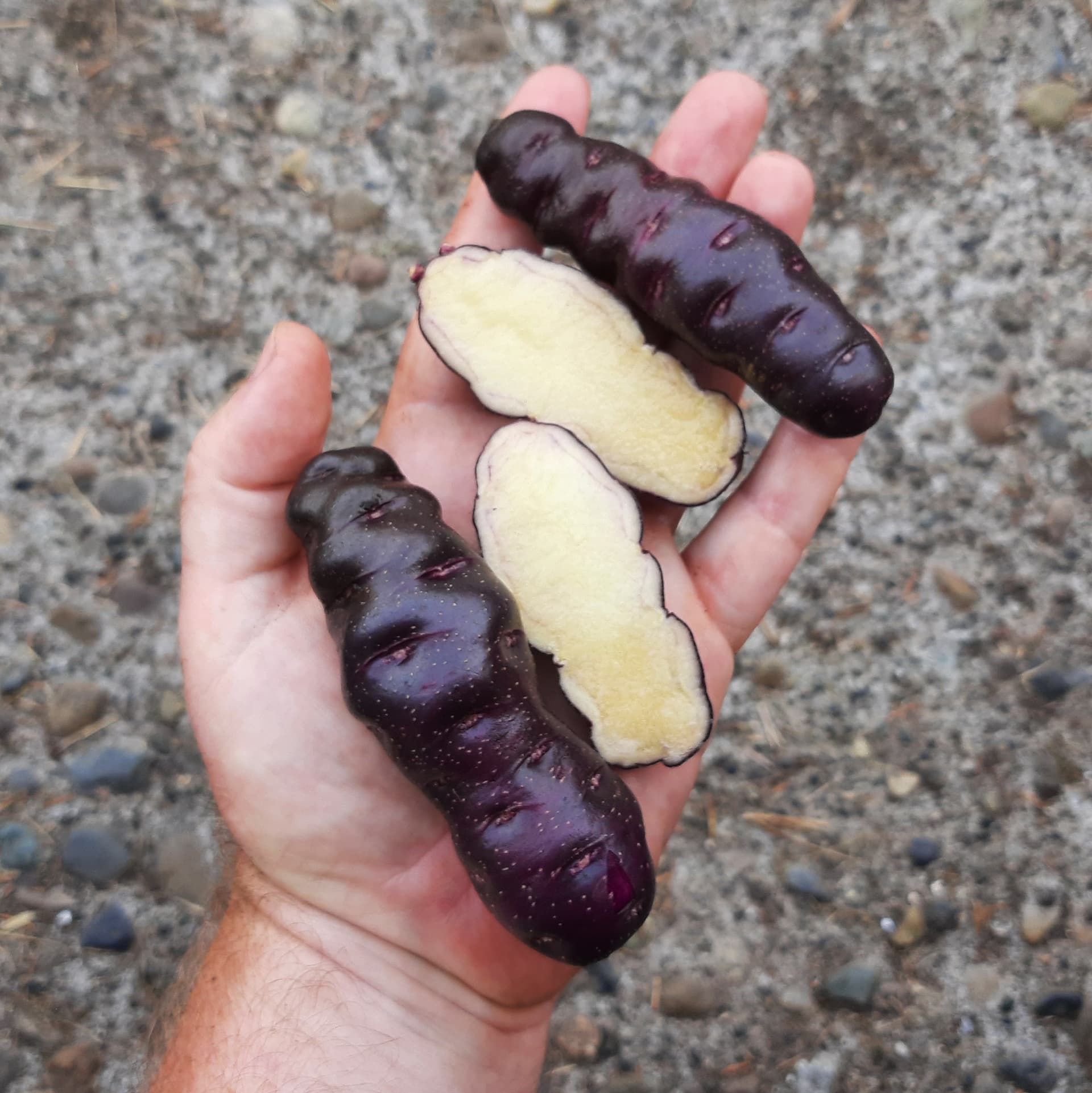 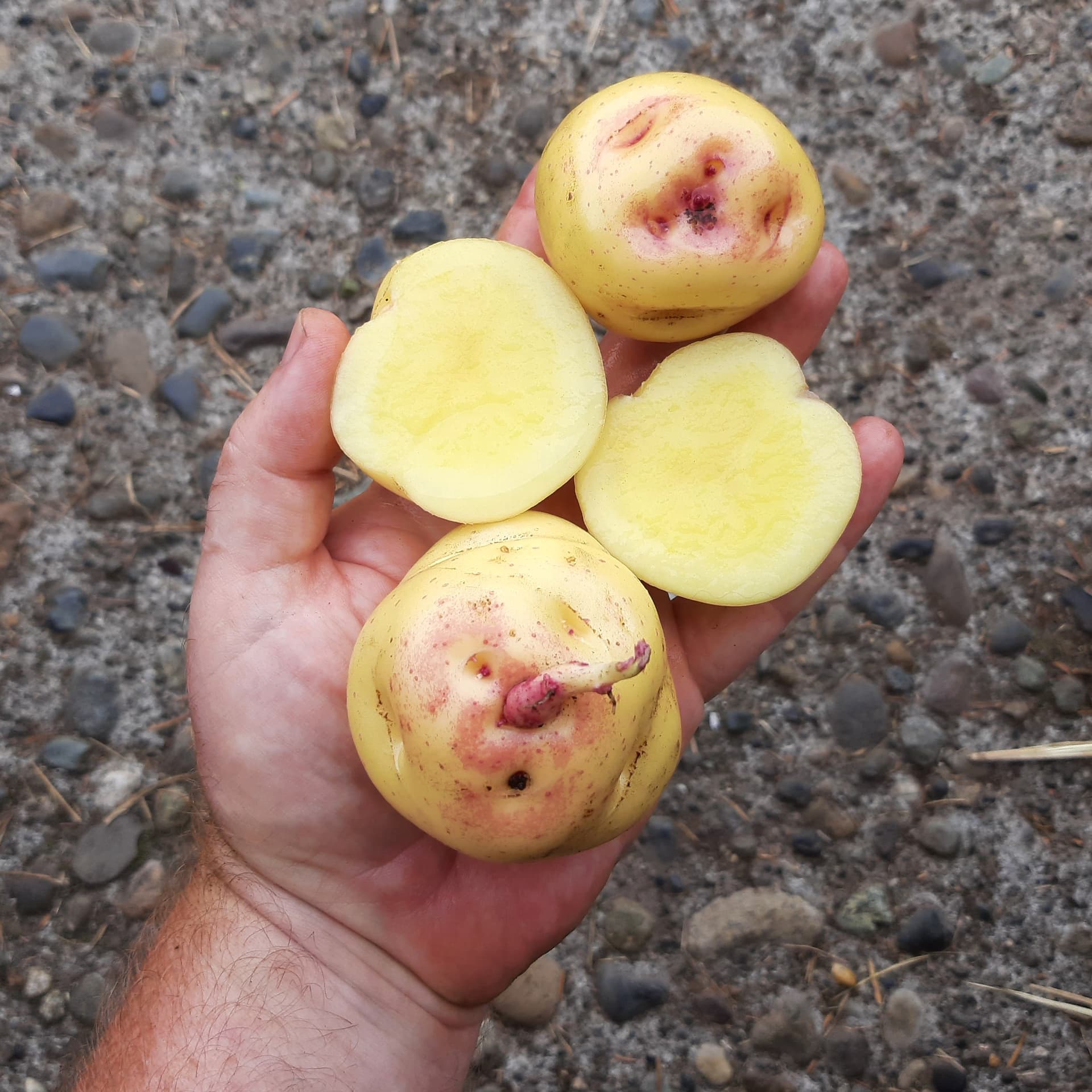 Here is the first definite keeper of the year. This one will pass on to third year trial. Another seedling out of Jancko Phinu. Deeper yellow flesh than the picture captured. Waxy texture and excellent flavor. I would prefer a more uniform tuber size, but these were grown under very dry conditions, so they may perform better in a year with more normal soil moisture. 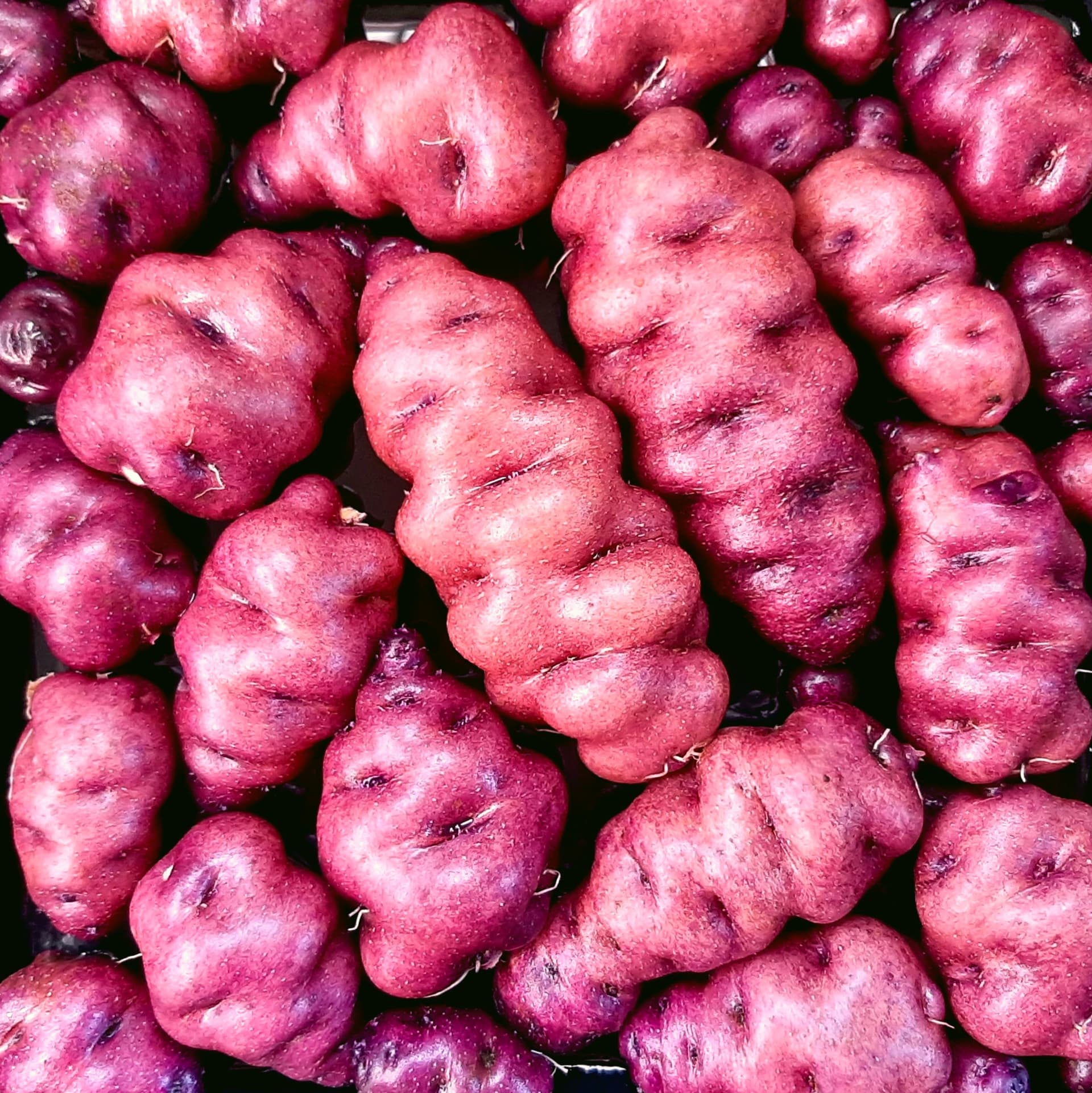 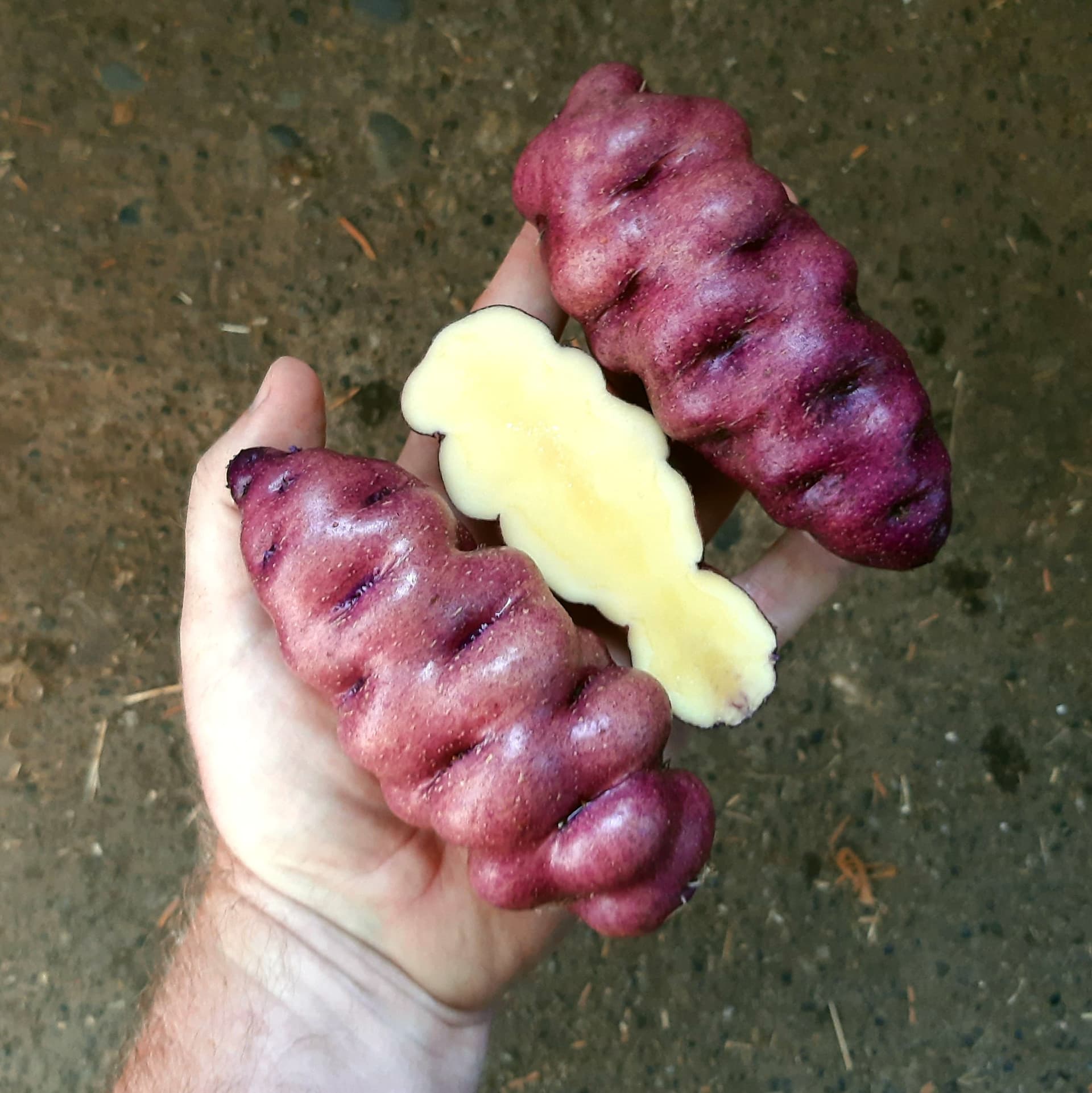 Another keeper, although I am a little disappointed with this one. This is BS278 x Bloody Banana. BS278 is a tuberosum haploid developed in Canada that has some commercial varieties and breeding lines in its background, including Houma and Earlaine. I made a bunch of crosses with BB to see if I could get a more practical potato with similar flavor and color. This was as close as I got. Unfortunately, while both parents have scab resistance, this potato obviously does not, or not as much. I will at least keep it for another year to make backcrosses with BB. 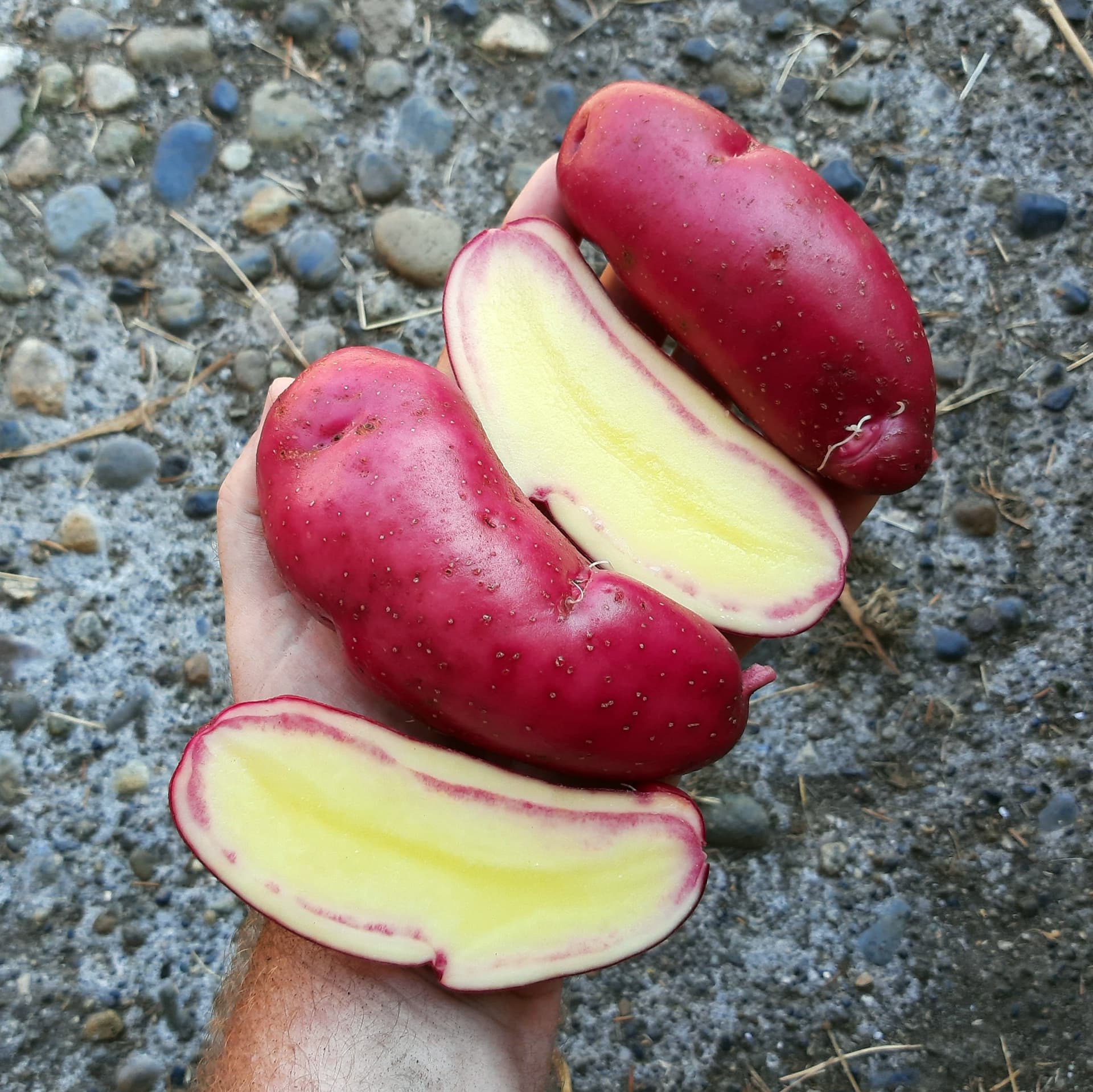 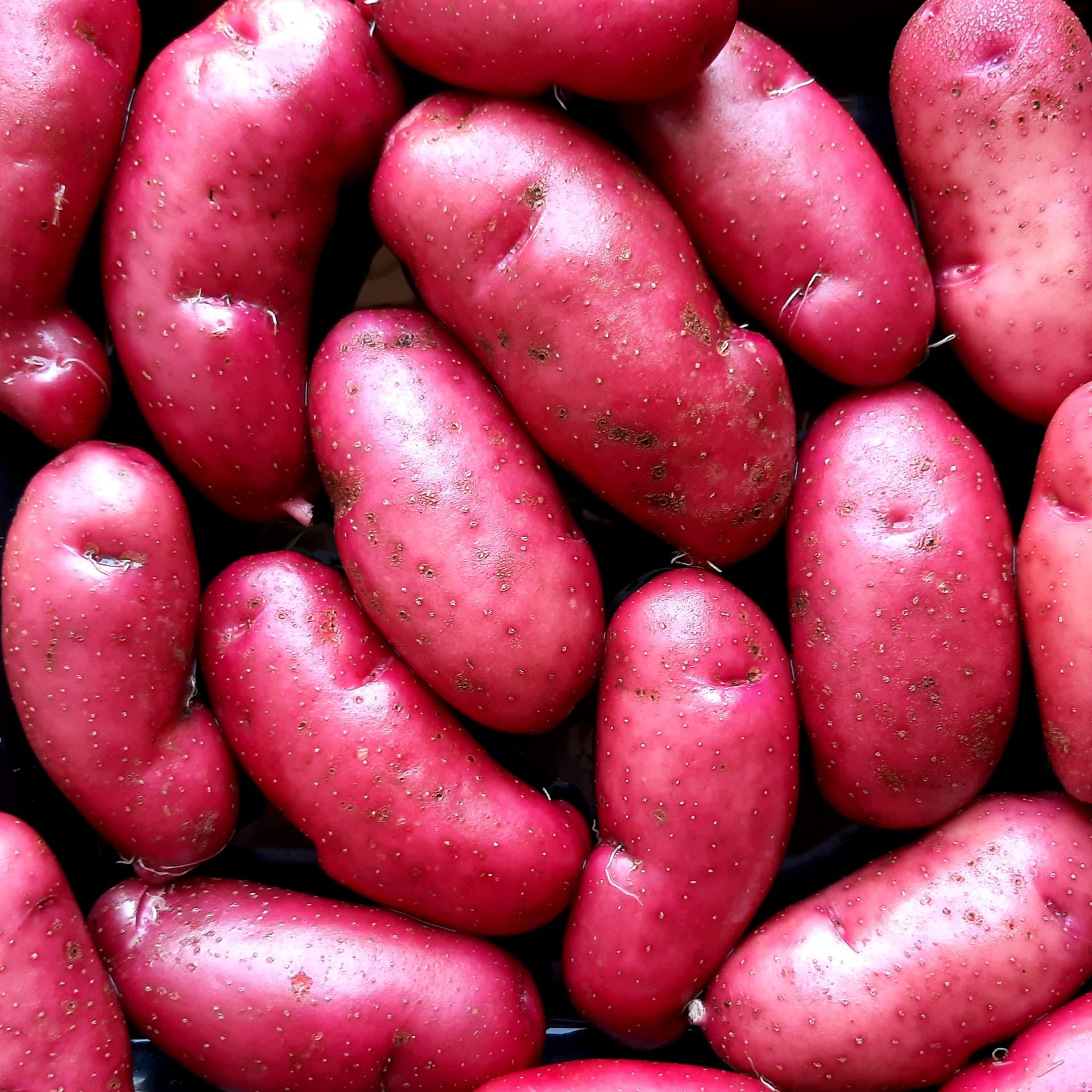 Another keeper. This is another cross between BS278 and Bloody Banana. Unlike the previous one, this one inherited very little of the appearance of BB, but it did get its excellent flavor. Very starchy, almost fluffy flesh. Light yellow interior, but a little darker than what the photo picked up. Very good yield and pretty uniform tuber size. The appearance isn’t quite as exotic as I usually aim for, but there is no arguing with great flavor. 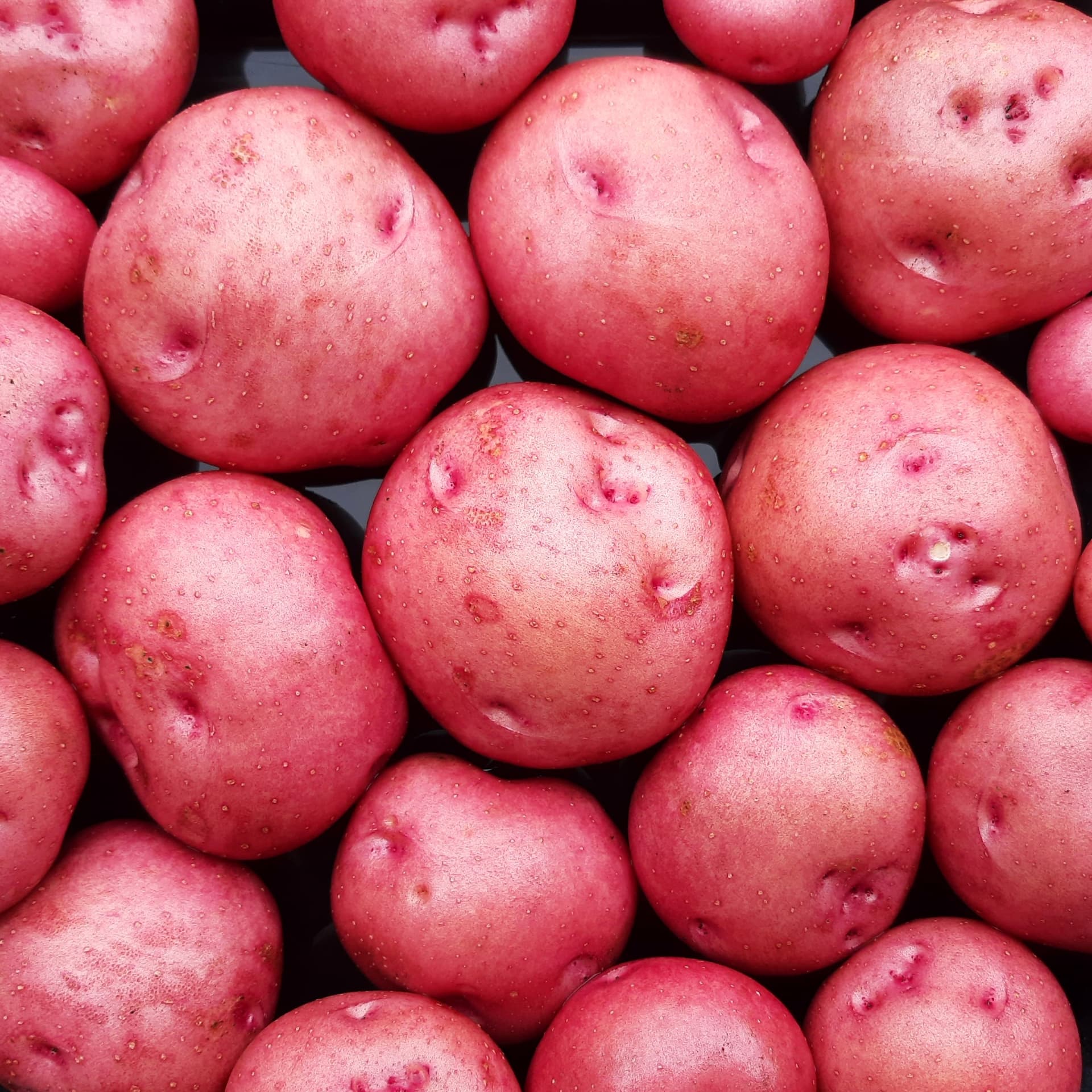 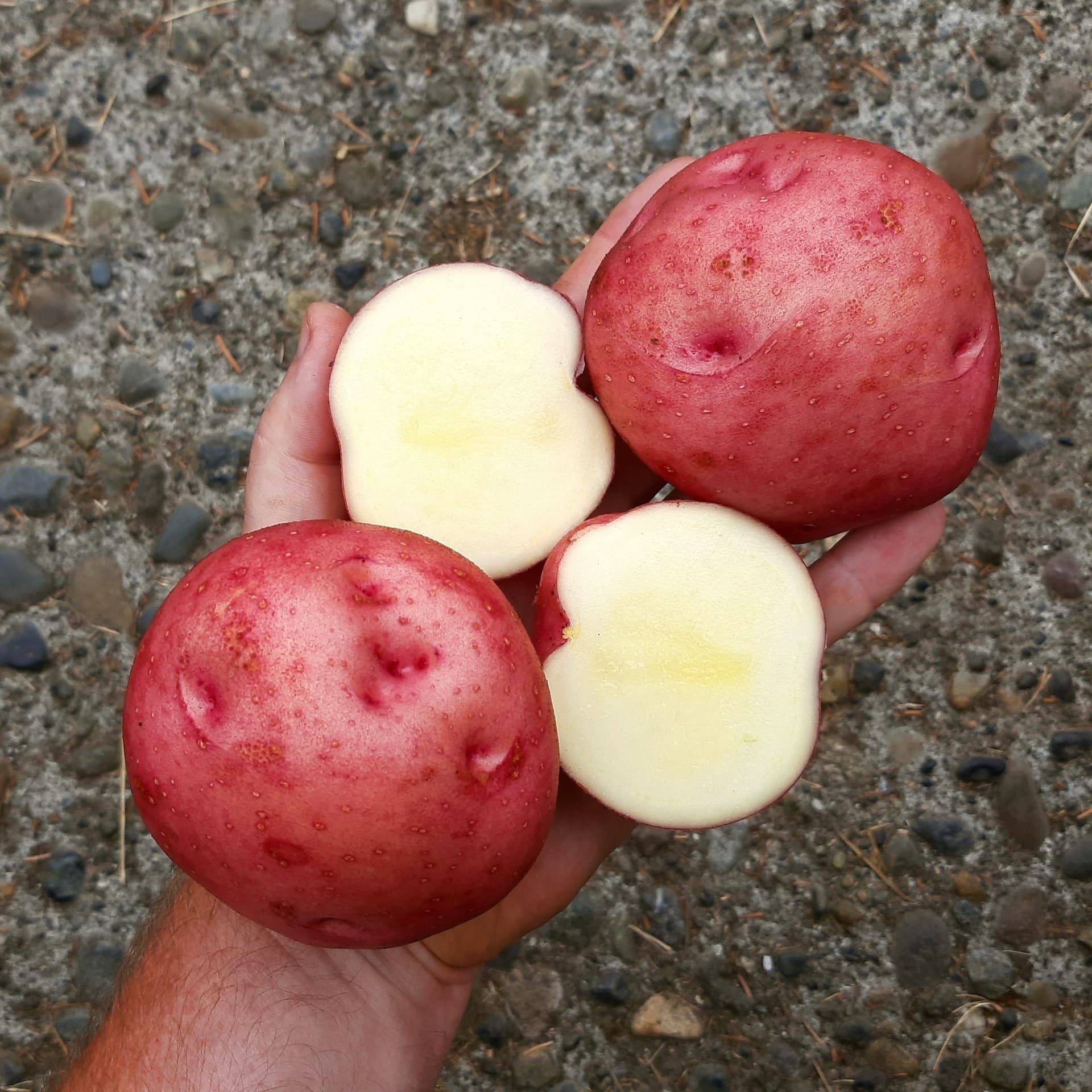 A couple of potatoes that I probably won’t keep unless I don’t find anything better. The first is a seedling out of Jancko Phinu that I had great confidence in. I planted a whole bed. The yield was amazing the first year and it has great flavor and light, starchy flesh. Yield was still good this year, but these were some of the largest tubers that it produced and some of them were sprouting, so that was a big disappointment. The second is another seedling of BS278 and the attempted cross was Bloody Banana, but the result doesn’t make sense. In the year I grew BS278, the next bed was Chiquilla Pitiquina, a lumpy variety with white flesh and a red ring, so I think that mystery is solved. I might keep this one for a year just for breeding. It would be interesting to cross it with some lumpy diploids to see what comes out. 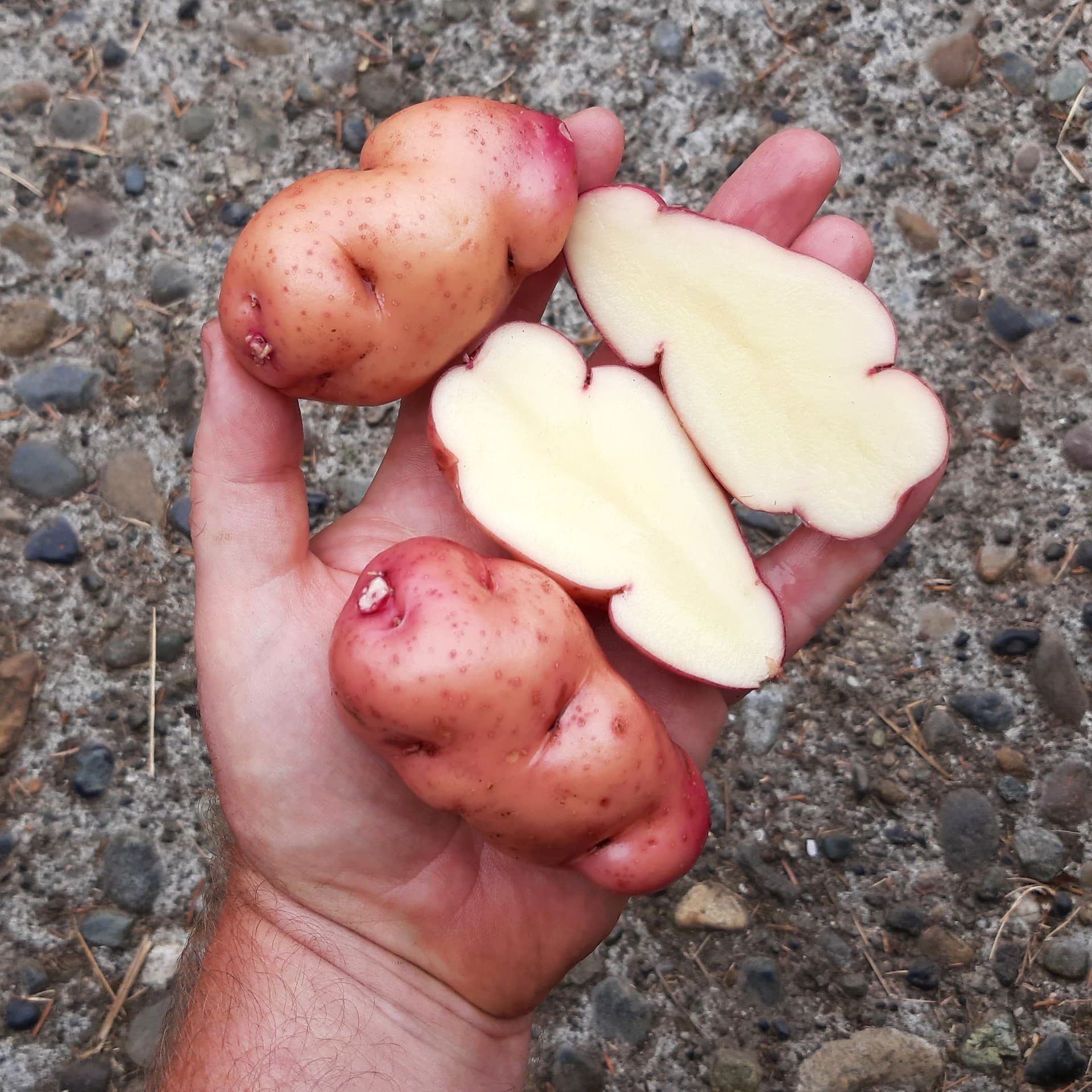 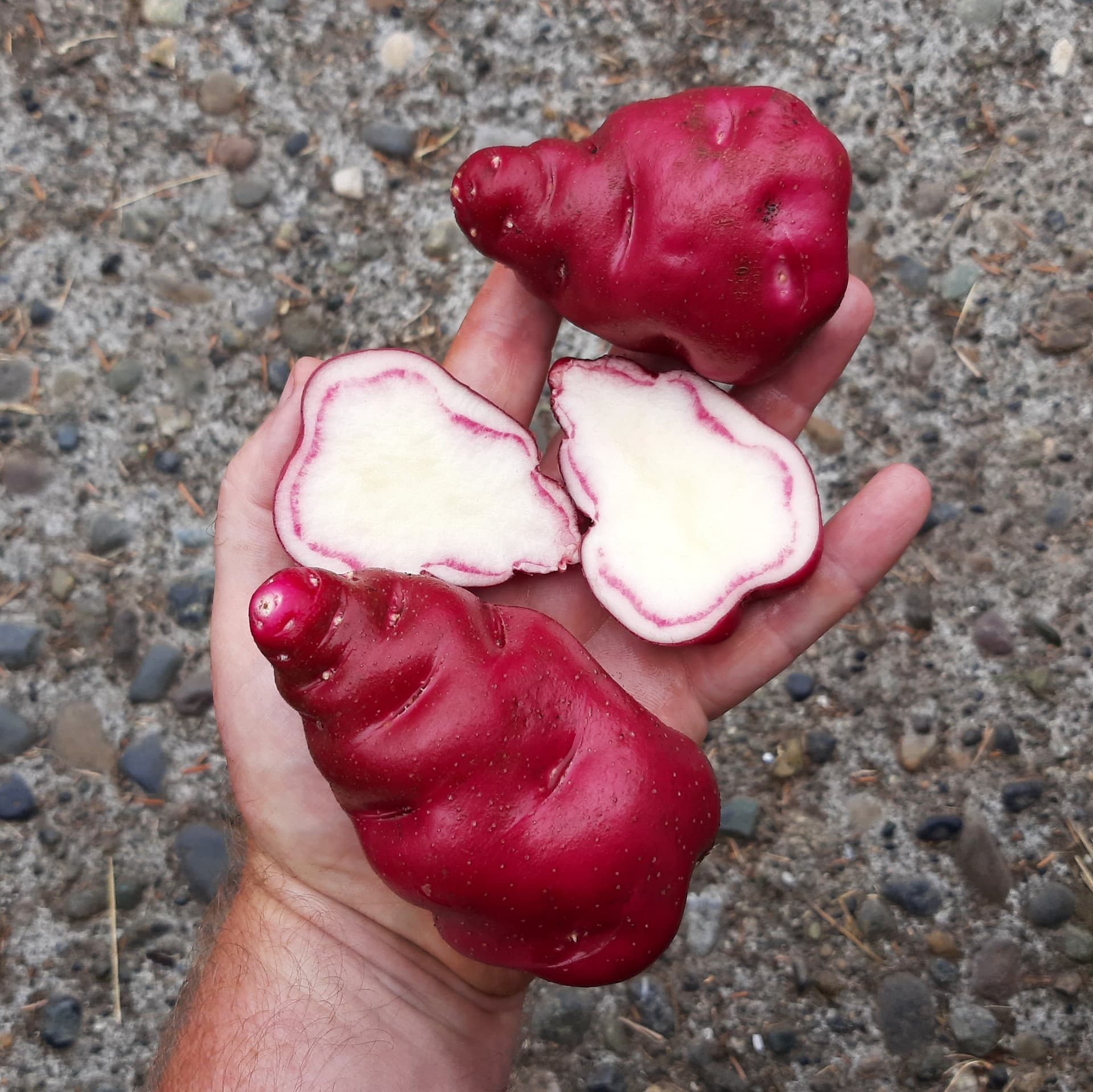 Here is a potato a little father off the beaten path. This is Valparaiso x Ayock. Valparaiso is a hybrid between a domesticated diploid and the wild species Solanum maglia, so this variety is 1/4 S. maglia. The various crosses that I have made between Valparaiso and other diploids are meant to steer back toward more domesticated traits. This is one of the most successful progeny so far in that regard. It has very good tuber size and yield for any diploid, much less one with a recent wild ancestor. Good flavor, light floury flesh, and thick skin. It would make a good baker. It is far from perfect though. Some tubers were sprouting at harvest, there is some chaining and other wild potato baggage. Still is has a lot of desirable traits and it is very fertile, so it will be easy to breed with. 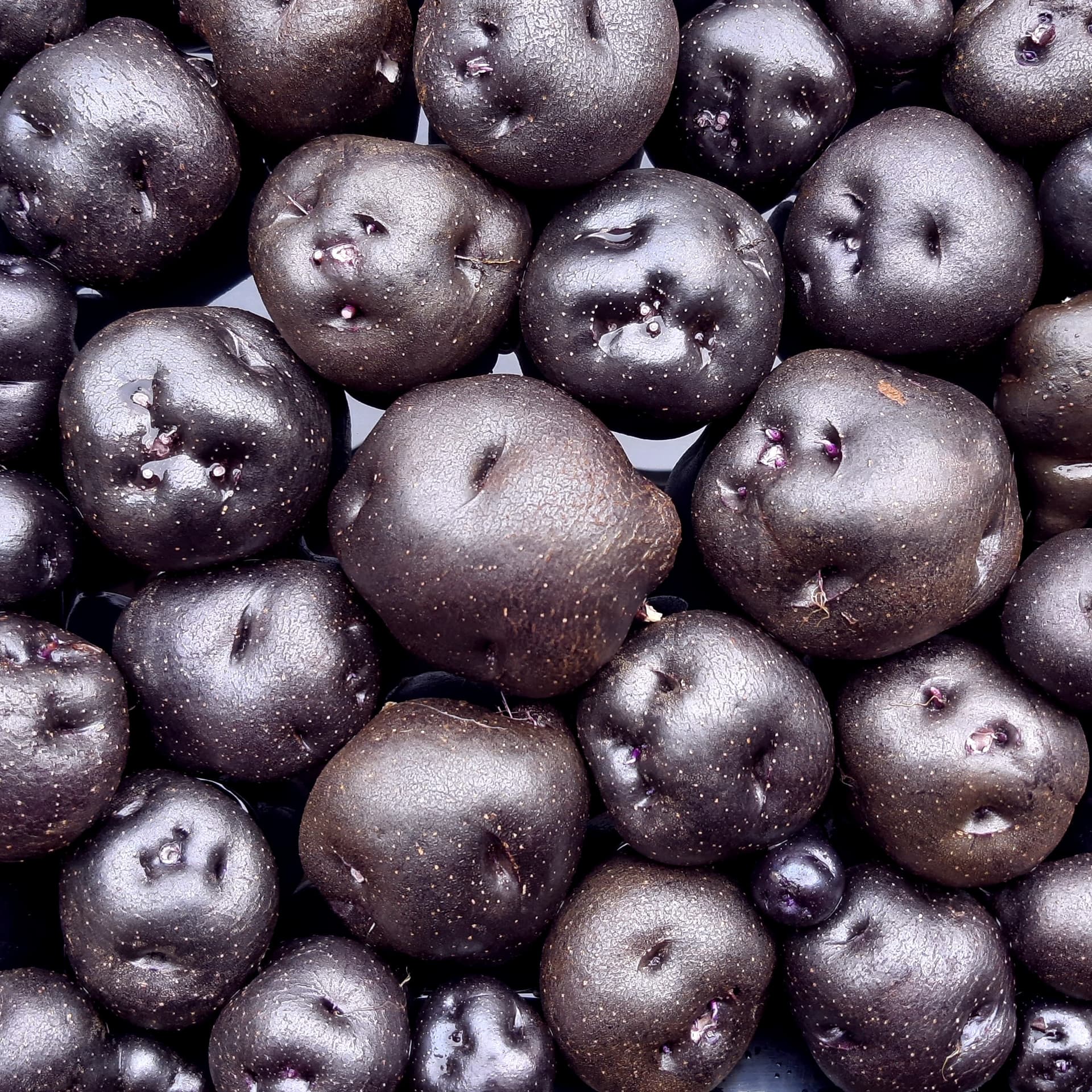 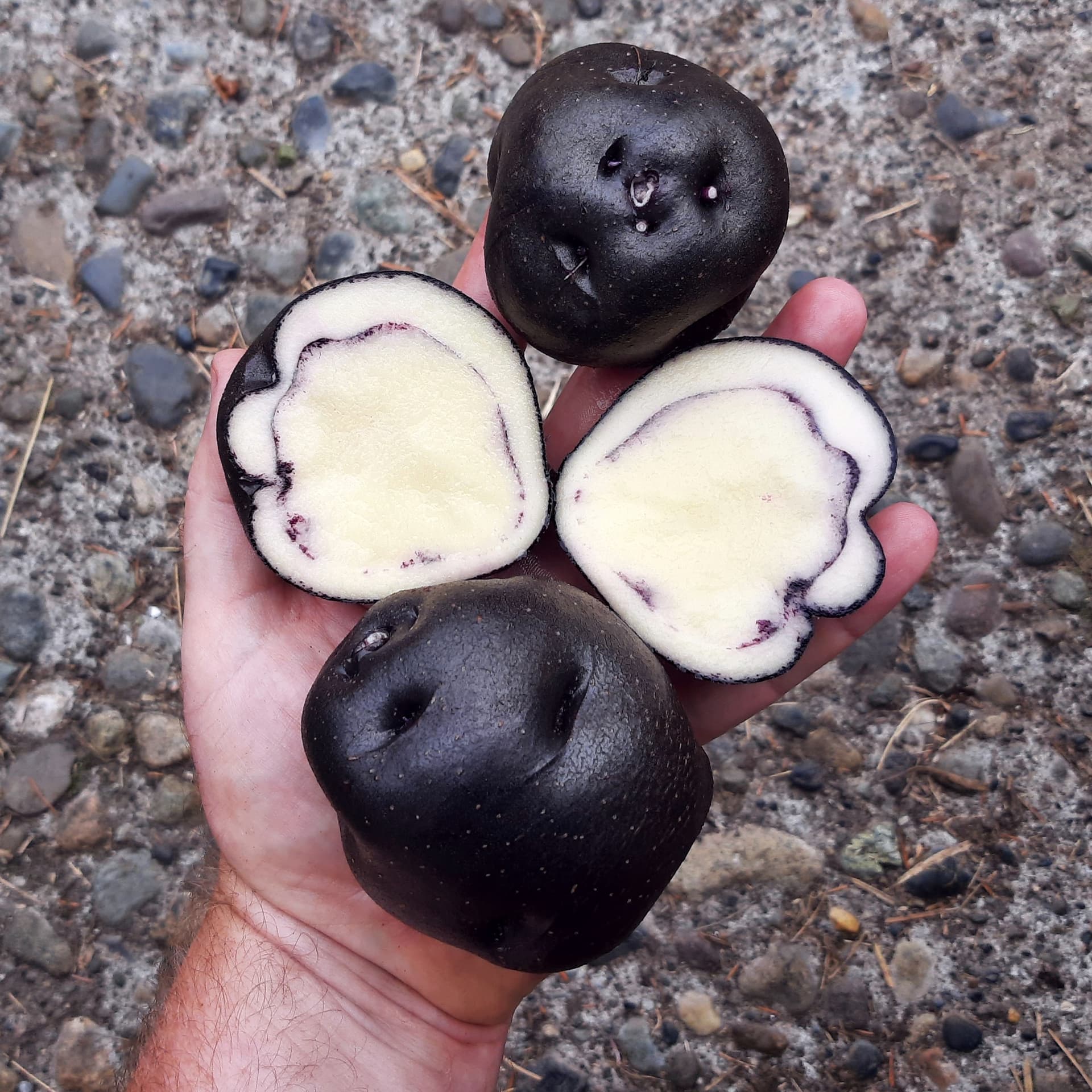 This was my number one selection from Valparaiso TPS last year and it held up this year. I don’t know the pollen parent of this one because it is from the same OP TPS that I sell. This is a high yielding but small potato. Because I prefer to eat potatoes roasted in their skins, I really like smaller potatoes. These are perfect for cutting in half and roasting on a sheet. Great flavor and texture. They have yellow flesh, but enough flavor complexity that they avoid the trap of becoming insipid as is often the case with very yellow potatoes. The texture is just to the starchy side of all purpose. They crisp up nicely. My small potato selections are never very popular, but I keep trying anyway. Tubers will be available this year. This one needs a name - suggestions welcome. 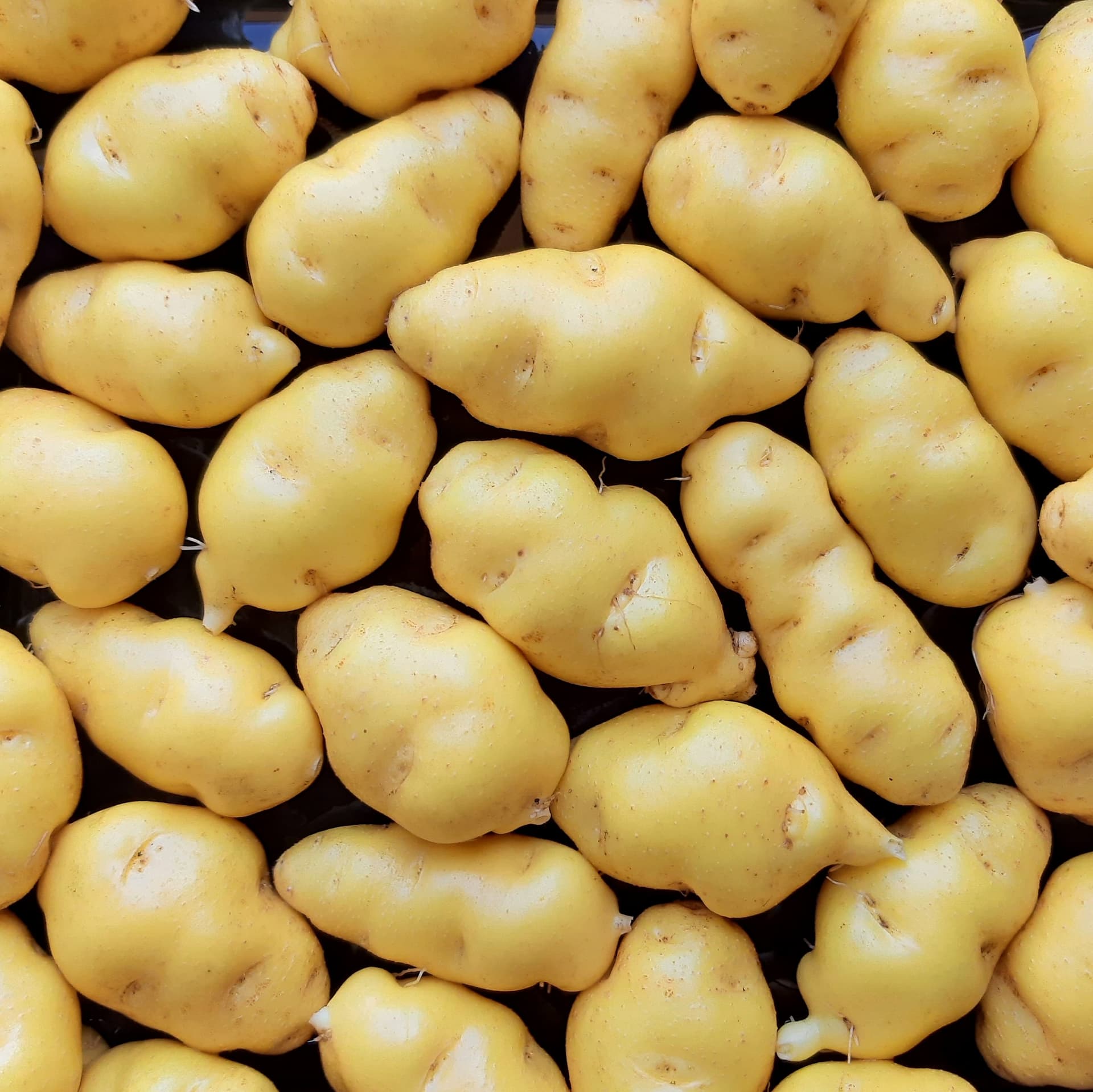 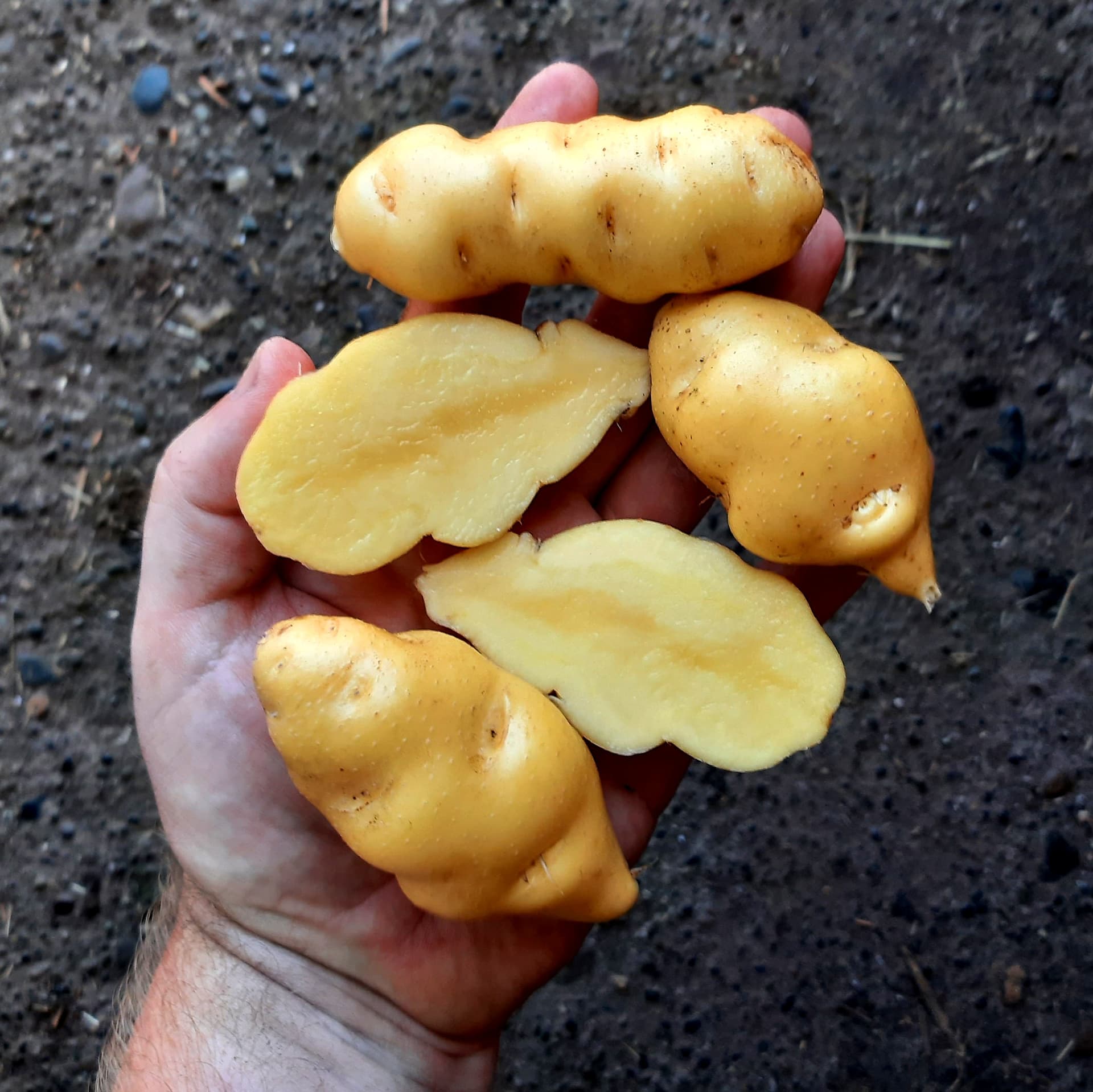 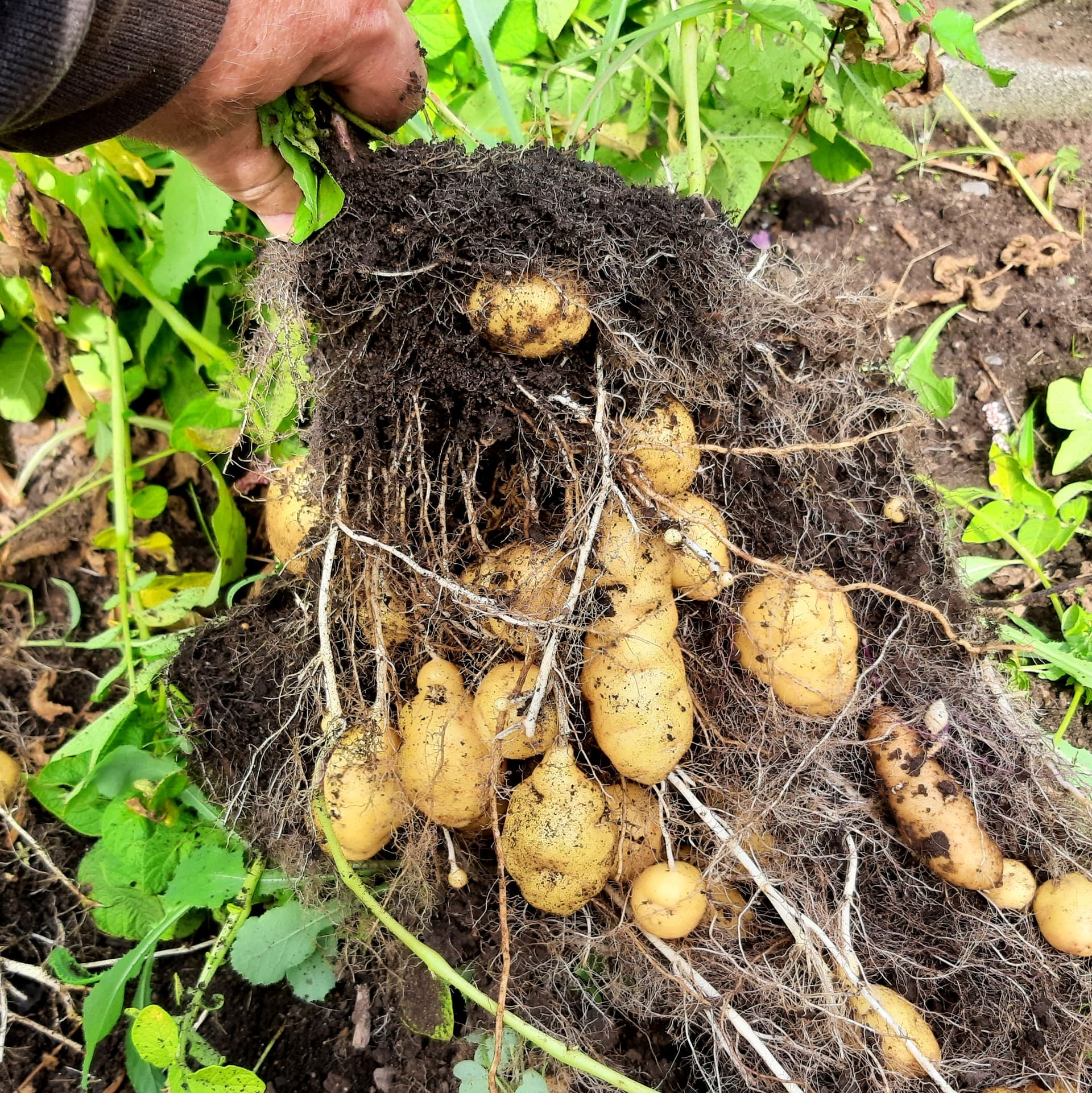 A lesson in trusting your gut. This seedling from last year only produced one small tuber. Normally, it would go right into the bin, but something about it caught my eye and I grew that tuber this year. It gave about two pounds of good sized, uniform tubers with nice yellow flesh. Another Valparaiso x Ayock cross. Like most progeny out of Valparaiso, the texture is very light and starchy. 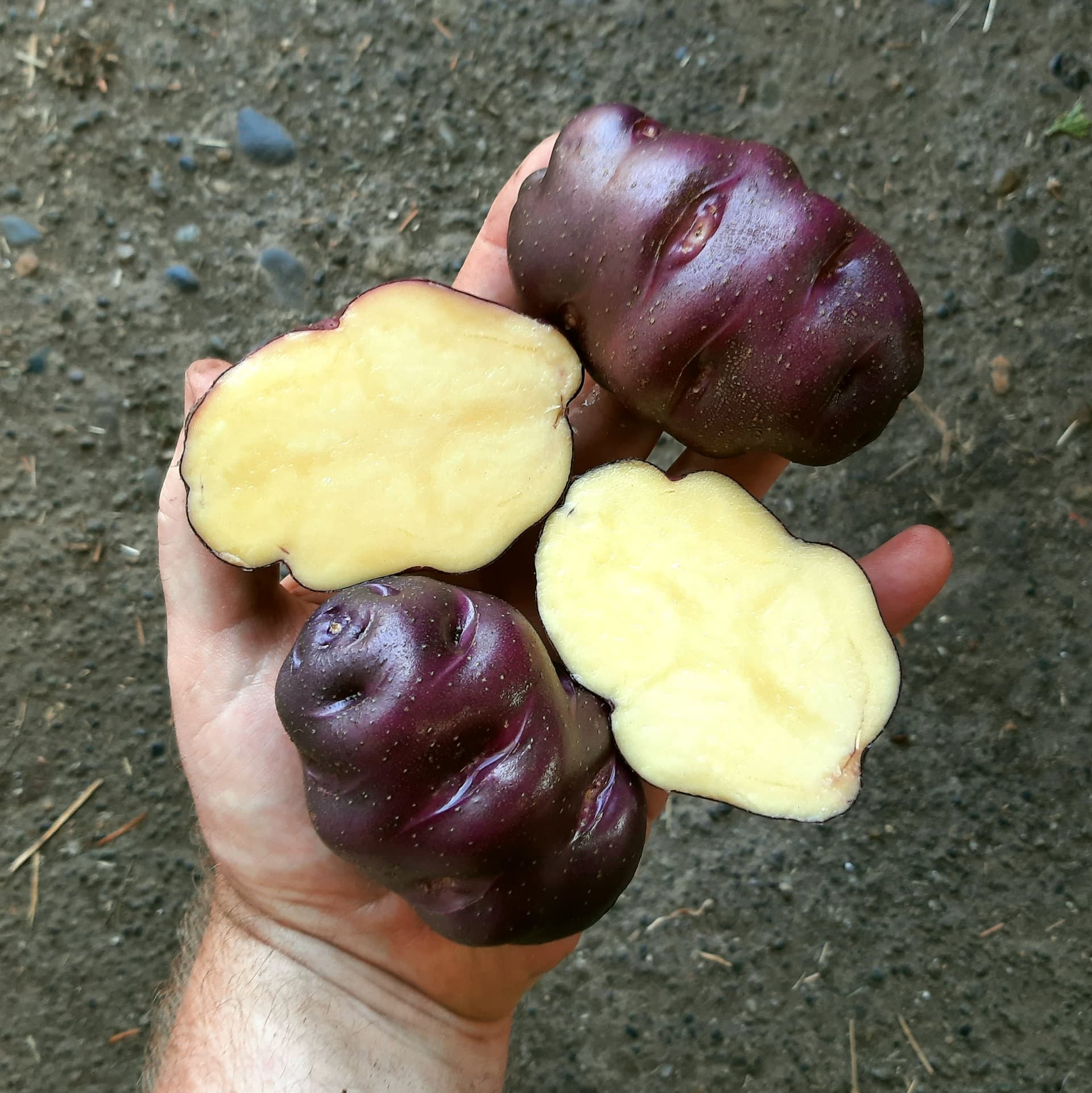