I recently got back from vacation and discovered that a couple of my oca plants had overtaken the pathway separating their bed from the rest of my garden. Remembering the post about oca pie, I thought I would try adapting a rhubarb crisp recipe to oca stems, given that I was about to have a glut of trimmings!

I started with the New York Times recipe, and substituted the chopped rhubarb cup-for-cup with the oca stems, prepared the same way as for oca pie (trimmed and cut into 1/2" to 1/3" segments). I used a Meyer lemon from my tree for the “lemon or orange”. I didn’t make any other changes to the recipe.

6 cups of oca stem, freshly harvested and coarsely trimmed. Alas, all of my plants have green stems, no red for me: 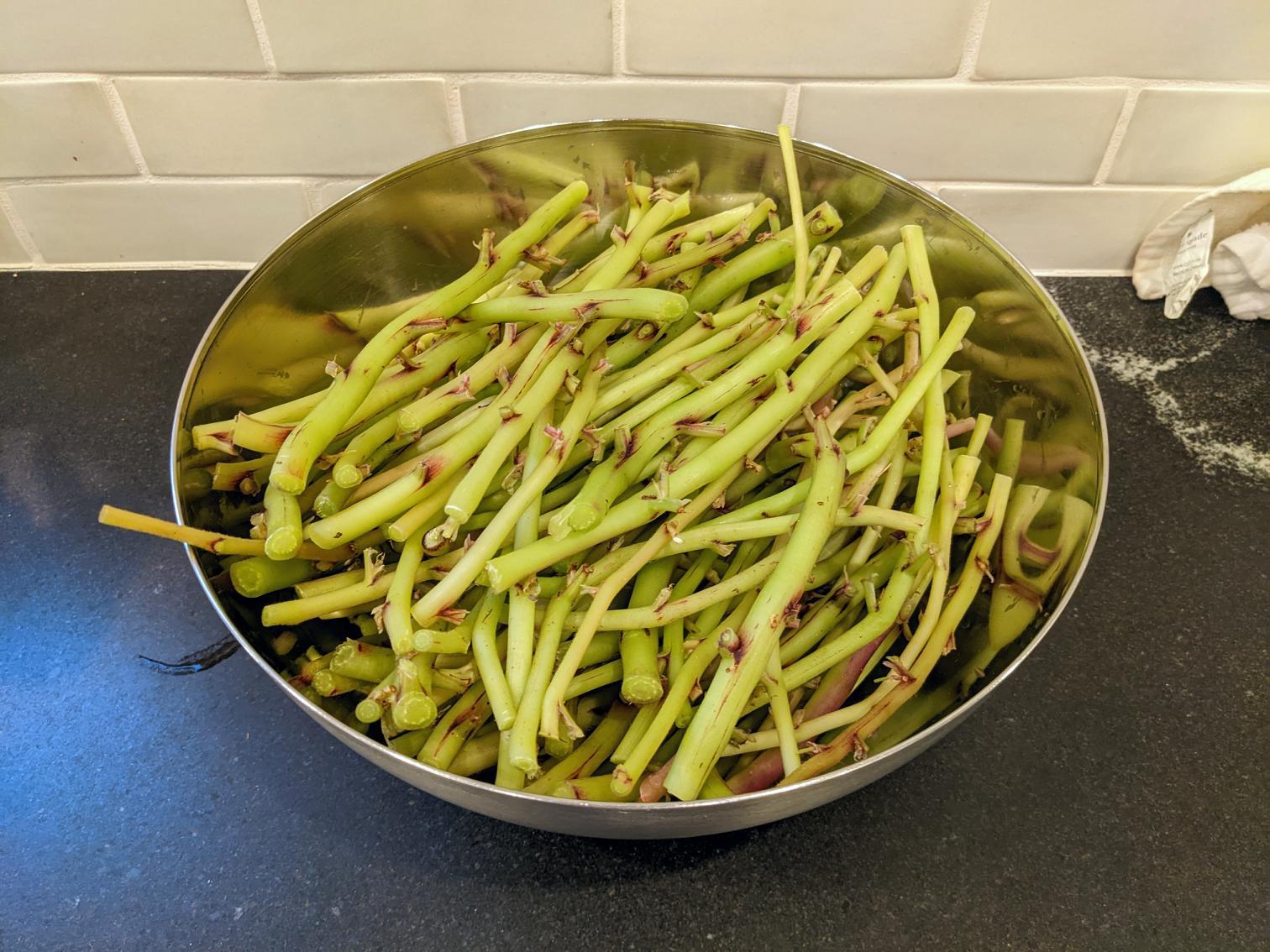 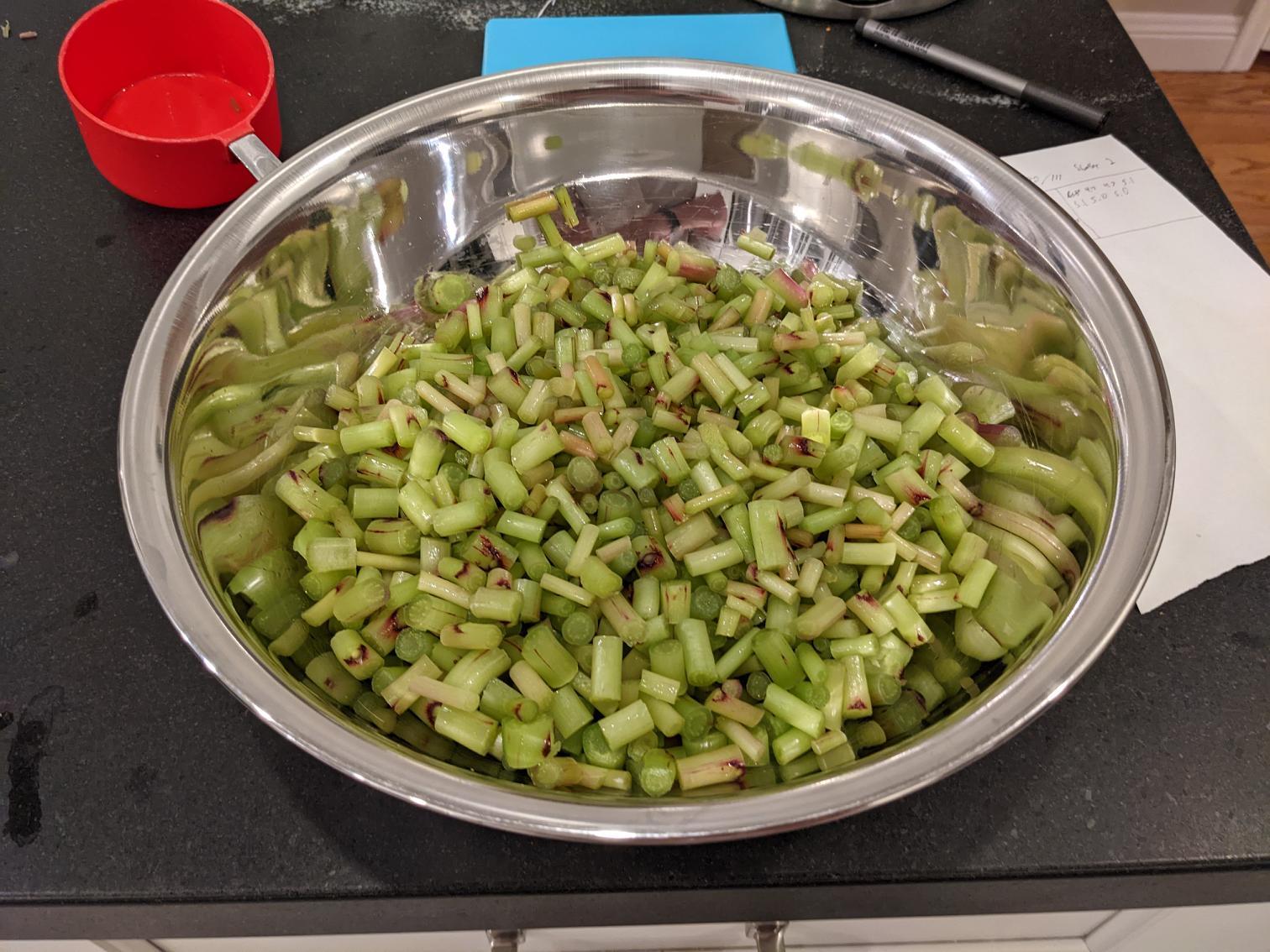 in the dish, ready to top: 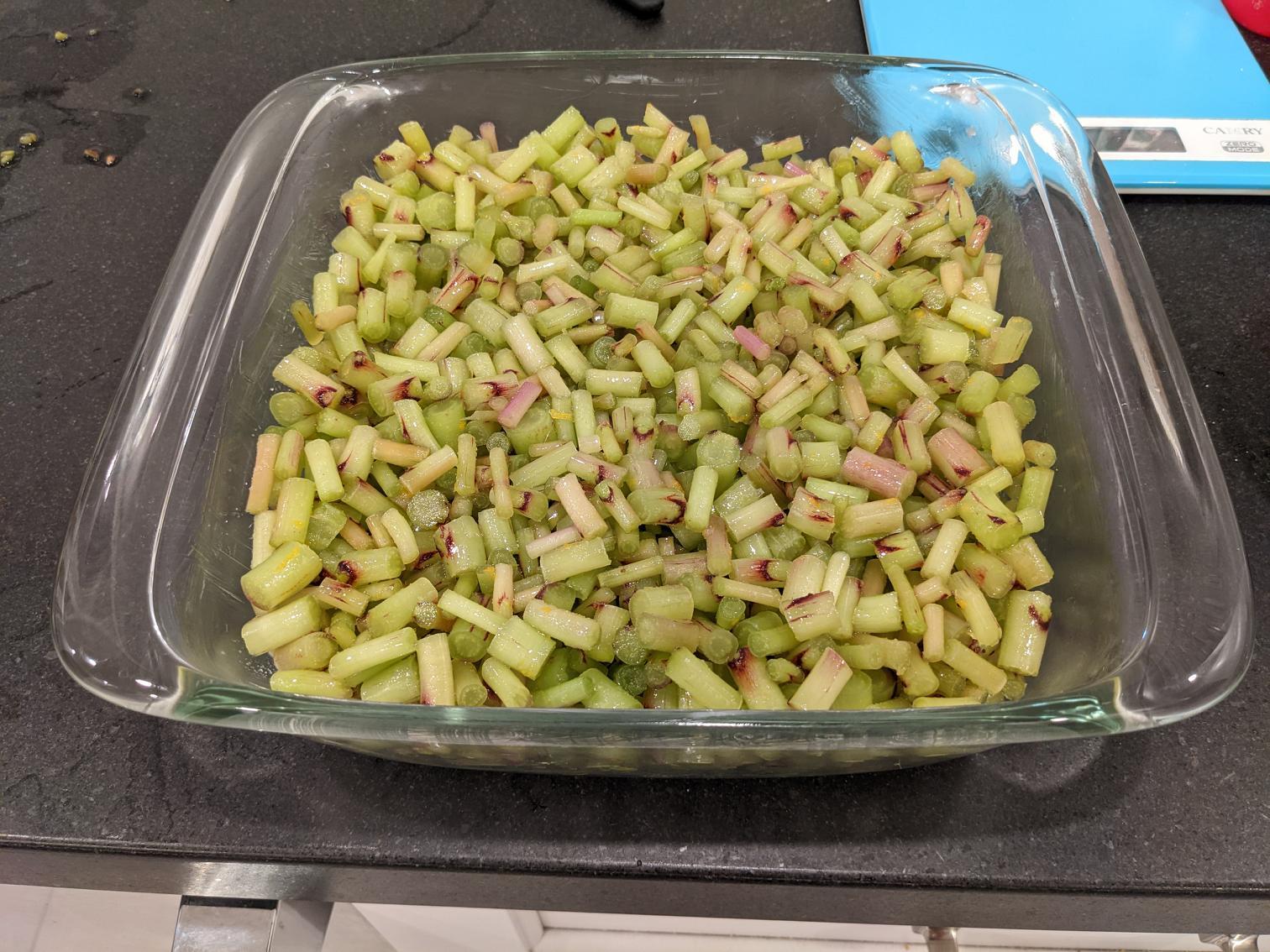 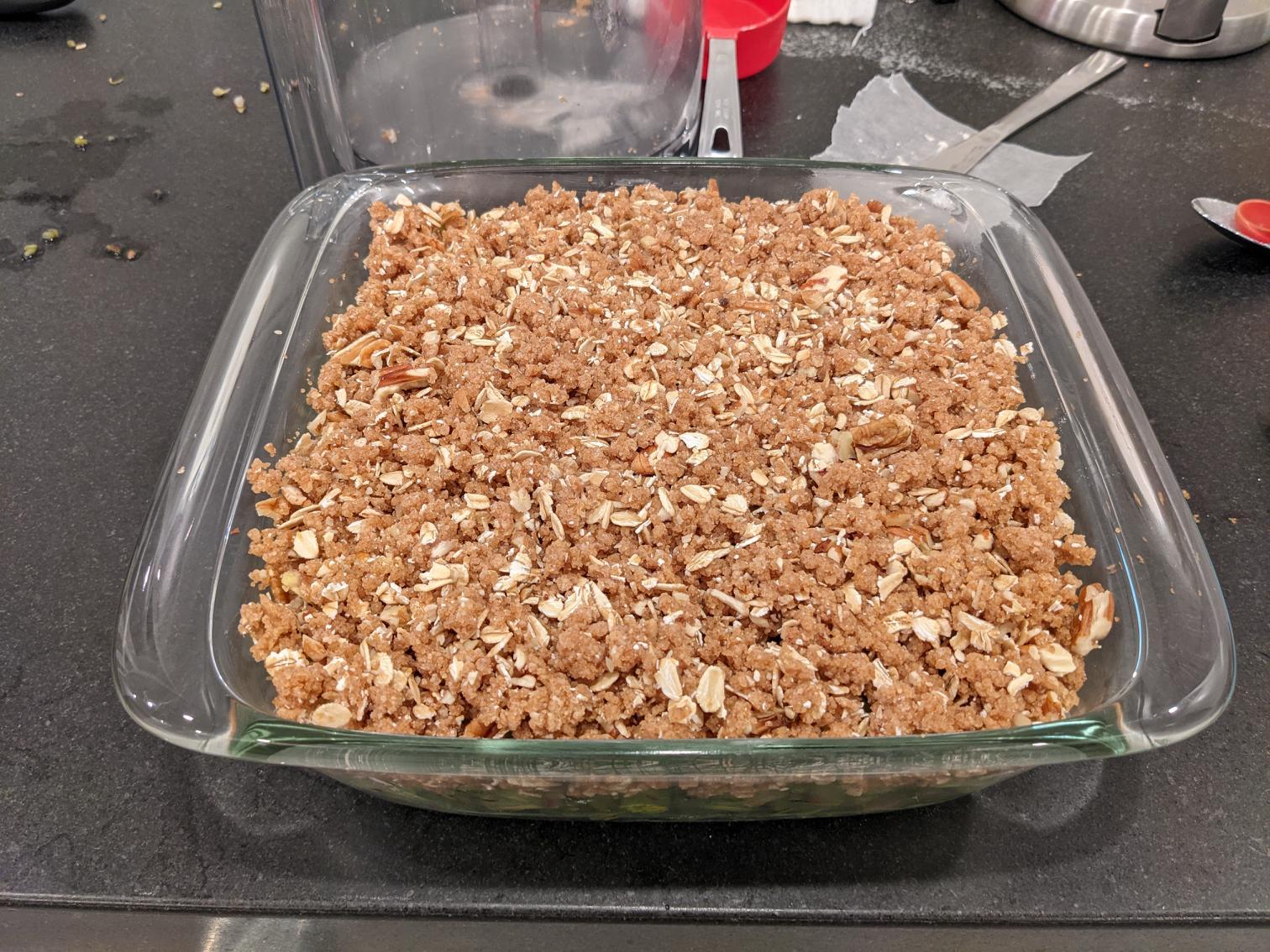 and finally, served. I was pleased to see what little red I had stuck around to provide at least a little visual contrast: 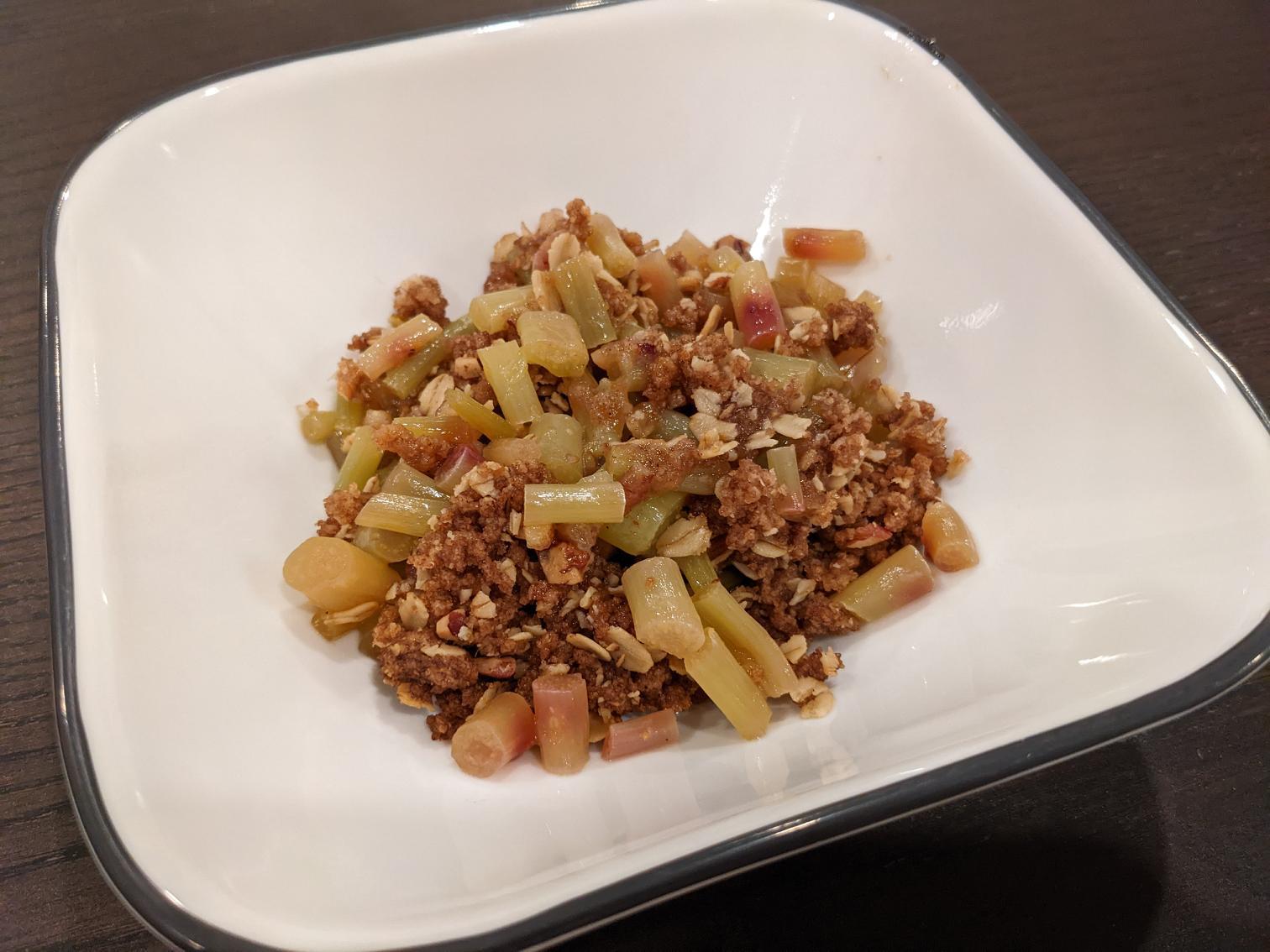 It was good! I think I actually would have enjoyed it even more tart, despite there being relatively little sugar in it already – definitely more experimenting to do. I suspect it would also be pretty tasty as a jam…

I did run into a few unpleasant tough fibers while eating it, but there were few enough of them that I suspect it was only one of the stems. I remember that one stem was way thicker than the others, so my guess is that it was that one. Next time I’ll see if I can spot those fibers before cooking to confirm that theory.

That looks great! It is probably something you should eat only occasionally, since we don’t really know how much oxalic acid is in the stems. It has never done me any harm, but I always feel the need to point this out for anyone who is not aware of it.

The stems get more fibrous toward the base, particularly on the older/thicker ones.