Hello! This is my first year growing Andean and diploid potatoes, and the different colors of the flowers are so pretty! First to flower so far are Gunter Red and Bloody Banana, and I think the blue one is Jancko Ajawiri. 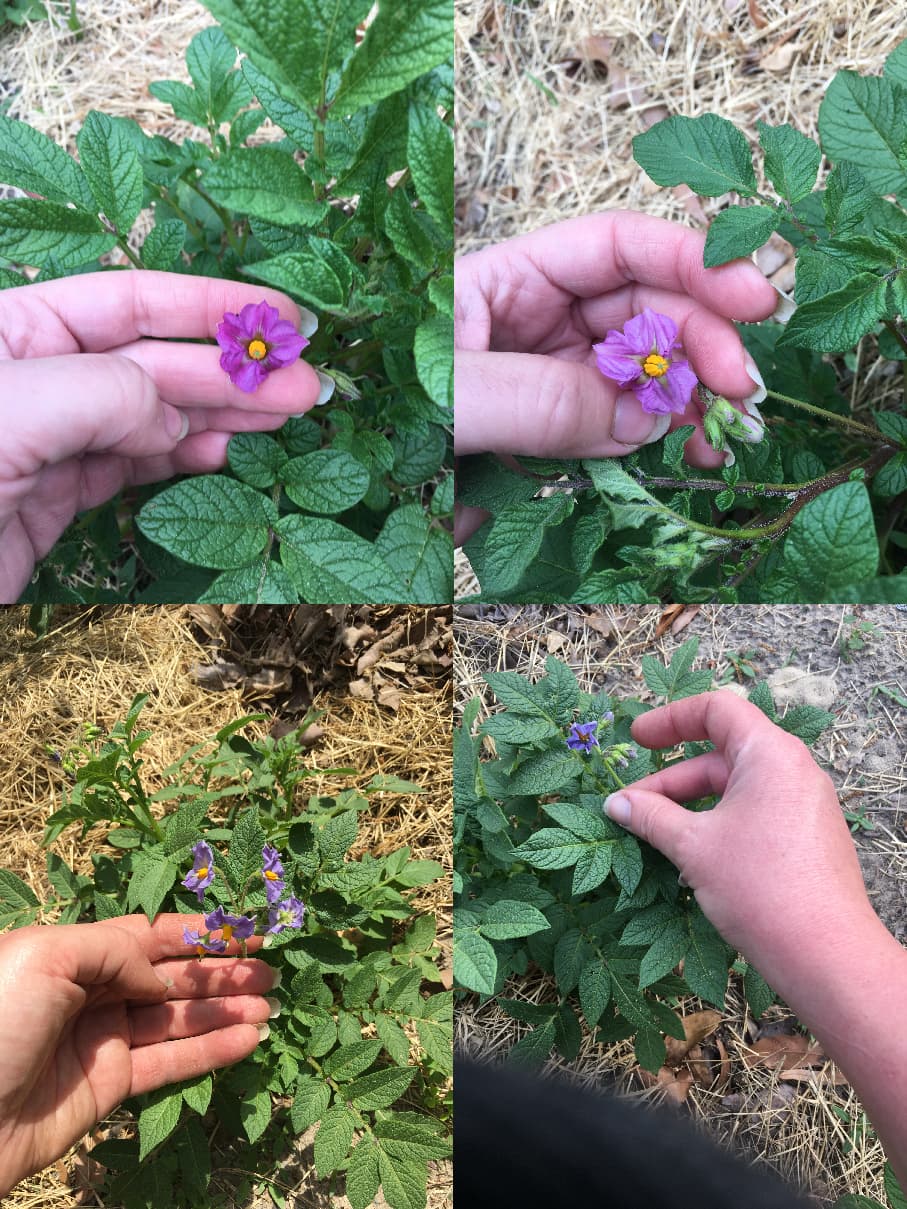 I’m curious about pollination - I know diploids don’t self-pollinate, but I am wondering if I need to hand pollinate in order to get berries and seeds or if insects usually take care of it? I haven’t seen bees visiting the potato flowers yet, but I’ve got lots of bees in the flowering cover crops in neighboring beds.

I’m also wondering - what does potato pollen look like? I’ve never grown male fertile potatoes before, and my experience with hand pollinating vegetables mostly involves squash, which have very visible yellow dust on the anthers. I don’t see anything that looks like pollen on the anthers of the potato flowers. I’m in zone 8a North Carolina, and we’ve had several days with high temperatures in the high 70s/low 80s, so maybe it’s just too hot? Or is potato pollen just really hard to see?

Insects will probably do enough pollinating for you to get seeds, but you will almost always get more if you hand pollinate as well. The right tool for the job is a cheap electric toothbrush. They vibrate at just the right cycle to free the pollen from the flower. If you don’t vibrate the flower, you usually won’t get any pollen from it. The pollen looks like a very fine white dust, but it is often produced in such a small amount that it is hard to see it. If you vibrate a flower onto something black, like a cell phone screen, you will usually be able to see some. It takes maybe 20-30 flowers’ worth before you really have enough to see easily with the naked eye with most varieties, although there are some really prolific types where you can see it streaming from the flower.

I will try that! Thank you very much!

I’ve been growing Jancko Ajawiri too. I’ve been using it as the female parent using another diploid that is far more pollen-fertile. Hoping to get berries soon.

I tried reciprocal crosses, but it doesn’t produce much pollen & what it does produce might not be viable, or very few viable grains. No crosses using its pollen have taken so far.

I suspect it’s not extremely fertile even as female. So I’ll be repeating the same cross over and over for weeks.

I haven’t seen bees visiting the potato flowers yet

Bumble bees seem to take some interest in them if you have lots of them. The flowers are typically fragrant, but offer no nectar.

I do controlled pollinations by hand, which is where I get most of my berries, but sometimes I get berries without any intervention on my part. Some varieties are very fertile and produce lots of berries readily.

I’m in zone 8a North Carolina, and we’ve had several days with high temperatures in the high 70s/low 80s, so maybe it’s just too hot?

It wasn’t when you posted this, but likely is by now. Potatoes don’t pollinate well at high temps.

JA definitely has some fertile pollen. I have stained it and it shows about 10% viable. That’s not great, but it is enough to make crosses if you have enough plants to donate pollen. I agree that the female fertility is also not great. Berry holding is poor and seed count per berry is pretty low.

FWIW: some of your JA OP seedlings produce much more pollen than their mother, as I had hoped. I probably won’t get many crosses this year, if any, but I’ll raise the OPs and continue trying back-crosses to JA (I did a few this year, no idea if they will take).

I’ll send some of the tubers from the OPs to Tom Wagner to let him help sort them out. Hoping to find serendipitous flesh/skin color variations from your pollen cocktails. Grow those out, then sib crosses & back crosses. I’ll grow the whites out too, but will give those less attention.

But will they mature & produce viable seed? They would if I did enough of them. Hopefully that will happen next year. Hopefully fertility increases from generation to generation.

Fingers crossed. I bet they will give you at least a few seeds.

Bumblebees love potato flowers, I would be surprised if you don’t get any visitors to your potatoes. I normally get pollen by using an electric toothbrush to buzz the pollen from the anthers. So If you want to do controlled pollinations that’s how’d you get pollen. Temperatures can be a problem anything over 70 degrees can reduce pollen production and fertility.

Yeah, I’ve given up doing any more pollinations for now. It’s too hot. I’ll leave them alone so they can ripen the berries they have.

I might squeeze a few more in later in the year.

Yes, the bumblebees do visit my potato blossoms, but most of the varieties I’m working with at the moment not very fertile–yet. I’m hoping future generations will be more so.

Thanks. Only need a few to jumpstart things.