Recovery of some Tom Wagner clones

Opportunity knocked yesterday when Nathan Pierce sent me the contact information of a farmer nearby who had grown some of Tom Wagner’s varieties for 25 years. She is retiring and hoped that someone might want to keep growing these varieties. She had four varieties, two with solid IDs and two less solid. The solid IDs are Skagit Beet and Satin Gold. I am very excited to see Skagit Beet still alive, as I grew it back around 2012 and found it to be a very good red flesh potato, although heavily virused even then. I was never aware of Satin Gold, but my guess is that was a Satina x Aggie Gold cross. The less solid IDs are Kern Toro and Tom Kaighin. I think Kern Toro is probably correct. If so, that is exciting, because it means that we now have recovered Azul Toro and both of its parents, Negro y Azul and Kern Toro. I thought that Tom Kaighin was a yellow potato, but I’m not entirely sure why I thought that and I can’t find a description now. I’m sure that Tom will be able to clear these questions up. These will all go into tissue culture, then virus testing, and I presume cleanup after that, since I have never seen a variety more than 10 years in field propagation without viruses. Hopefully, they will be cleaned up and ready for people to start growing again about a year from now. 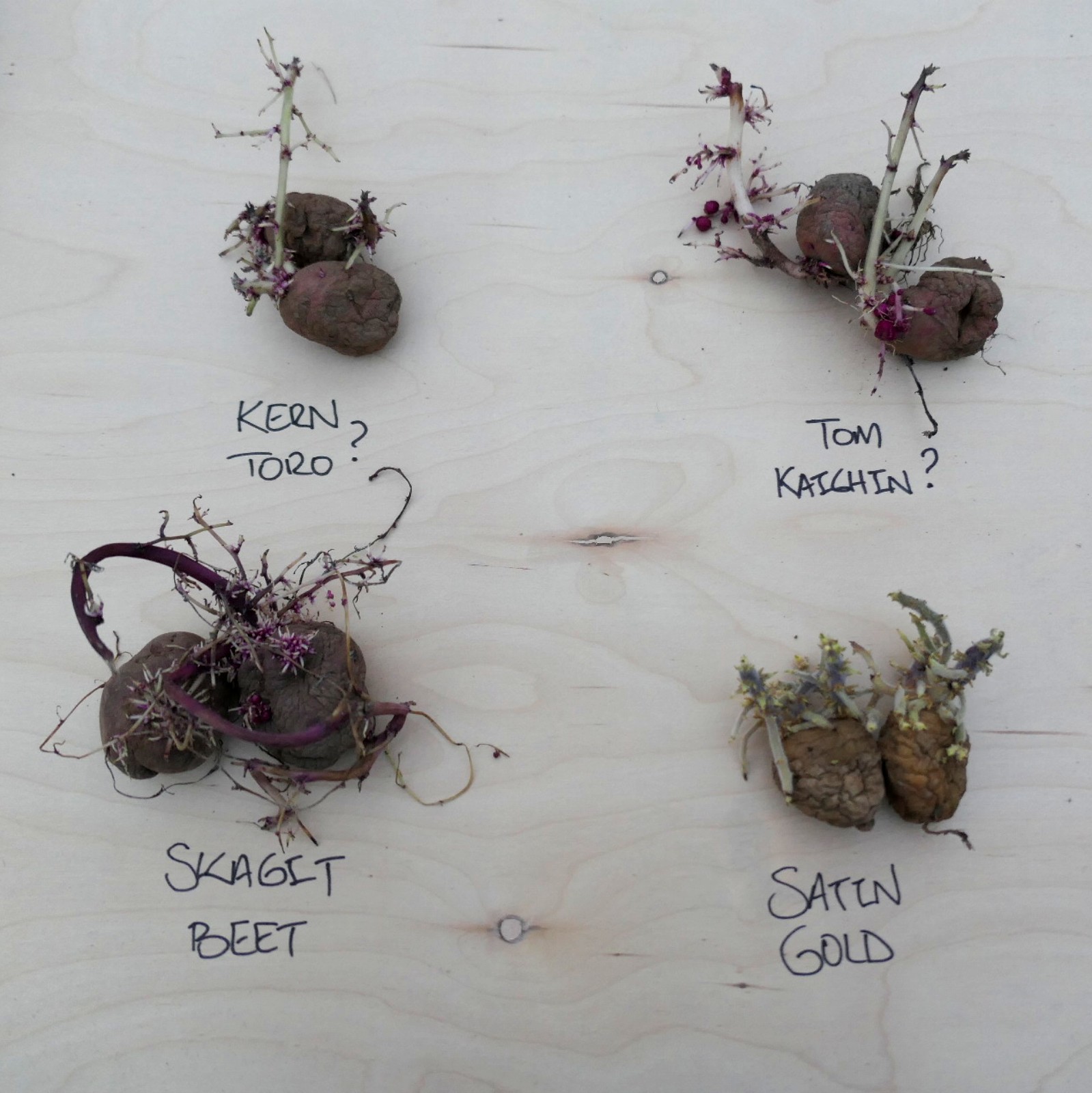 We could get an opinion from the man himself, but I haven’t heard from him in a few weeks. I’m checking in with mutual friends to see if anybody’s heard from him.

He’d be delighted to hear the news that someone saved some of his varieties.

I also posted this on the Kenosha Potato Project group and he responded there with some additional details. I’m sure he won’t mind if I copy those over here:

When I think of all the potato varieties I have created since 1954 I thankful that a few withstood a heavy viral infestation and still performed at all !

Yes, I m excited that Kern Toro, Skagit Beet and Satin Gold were in existence yet.

Satin Gold was among many hybrids made about 1998 with Satina, a gold potato bred 40 years ago by a German breeder. Satina has lots of nice resistance to leafroll and virus Y among other things therefore it was a no brainer to use it.

More importantly was its earliness and I had many clones with 45 to 65 day maturity.

Kern Toro being alive is special to me

I hope many will be able to make the cross that created Azul Toro. It is a Mendelian classic to help train potato breeders

Kern Toro is a classic cross. A hybrid between a Louisiana potato and a North Dakota potato. The most redeeming trait is it’s new potato flavor both fresh harvest and out of storage,

It turned out that there were only three varieties out of the four bags supplied by the grower. Tom Kaighin was not there. What was labelled Tom Kaighin was just more Kern Toro. But rediscovering three of Tom’s clones at once is still a big win. And they have been through a particularly valuable kind of selection, since they have been field propagated under organic conditions for 25 years and remained productive enough that they were still grown for the farmer’s market until recently. Very few potatoes would pass that test.

These have now been established in culture. Some initial quick tests revealed that they are infected with PVY and PVS. They probably have other viruses as well. I will hope to have clean plantlets ready by spring so that I can grow these in the field next year. 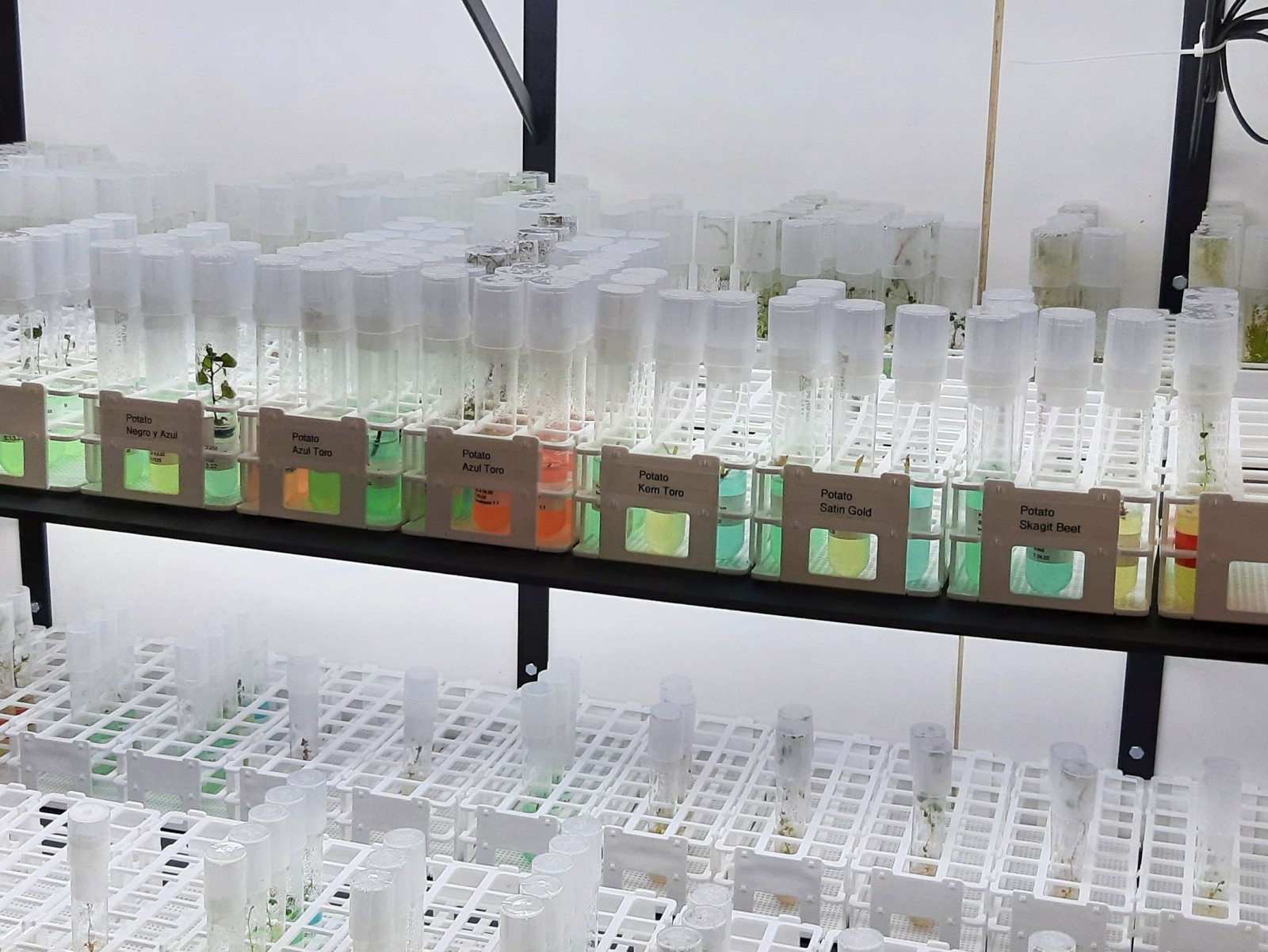